Off Off Broadway, New Play
Runs through 5.5.13
The Bridge Theatre at Shetler Studios, 244 West 54th Street 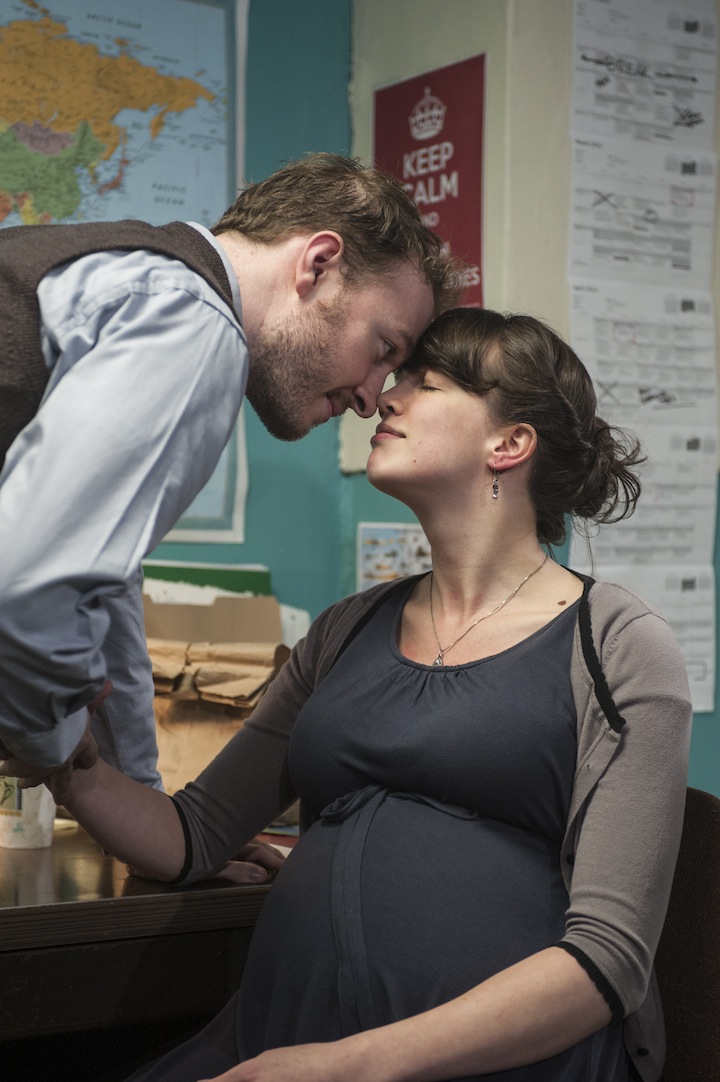 Pete McElligot and Glenna Grant in THE THIRTEENTH COMMANDMENT. Photo by Alex Crawford.

BOTTOM LINE: A difficult but rewardingly challenging play about the human need to probe information to make meaning of life and the probable manipulation of that impulse.

In a moment when unlimited information is available and at the ready, to be accessed and utilized from nearly any point on the globe given the proper technology to wield it, facts -- though cheaper than ever -- retain their status as ultimate makers of meaning and winners of arguments. And what, if pedaled just so, do these facts become when used as markers of dangerous or dubious ideologies? Entering into the conversation is Joshua H. Cohen’s new play, The Thirteenth Commandment, playing now at The Bridge Theatre, which addresses how factious facts function in this decidedly undebunkable decade.

The Thirteenth Commandment opens on high school history teacher, Jason Efheim (Pete McElligot), sneaking into his office after having found himself in a good deal of hot water. Young, vivacious and passionate, Jason prides himself on doing what he sees as his fundamental duty as a teacher: asking his students to think critically about a topic from their textbook and to question the material presented to them. This time, however, things have become more complicated. The latest challenge to the lesson plan happened to be on WWII and the particular subject placed up for debate was the legitimacy of the facts presented about the Holocaust. And now, an unhappy witness to the events has leaked the story to the press. From the play’s get-go, Jason is bombarded with questions about his motives, though he always staunchly argues his case as merely attempting to open the minds of his students. Set in real time, The Thirteenth Commandment follows Jason’s repeated frustrated response, including its subtle changes over the course of the play, tracing the fallout of one teacher’s supposedly well-meaning teaching style on the chaotic morning after.

Though its didacticism is overt, the play nonetheless accomplishes Cohen’s seeming goal: to discuss the potential dangers of an extreme ideology that attempts to deride the accepted norm, wielding so called “facts” as a means to win over a possibly questioning middle ground. In a time in which all theories can find facts to back them up on the world wide repository of anything-goes, and arguments beginning with the no-no of hypothesize first, source information second, Cohen touches on the difficulty of censoring radical and publicly pervaded theorizing without it being just that -- censorship. In a society where freedom of speech and thought should never be quailed at, how can hateful or hurtful claims be dismantled, especially when perpetrated under the guise of promoting that such valued and well-guarded amendment in the first place?

Using a topic that for many is one of the most gut-wrenching, Holocaust denial, Cohen effectively places the audience in the position of judging the proceedings from (it can be assumed) the perspective of the opposite end of the spectrum, and uses the course of his 90-minute play to allow the audience the ability to be swayed or not. The seductive siren in this case being a apparently well-intentioned and mind-opening good-doer of a high school history teacher, perhaps of the Dead Poet’s Society varietal, and one hell-bent on preparing his students for college life regardless of their familial history of under-achieving. Ultimately, the initially careful and conscientious teacher unravels a bit too far, revealing him to be as simple as initial assumptions would suggest (which is where Cohen veers off course a bit), though the prior 75 minutes present enough challenging rhetoric to make the play worthwhile. (And for any moments that should lag a bit in-between, Andy Yanni’s incredibly life-like set provides a plethora of effectively nostalgic bric-a-brac for the eyes to happily feast on.)

Cohen presents an important issue, dramatized as extremely and unpalatablely as possible in order to effectively imbue the audience with his own infuriated frustrations. While this play cannot be called enjoyable, it is fundamentally meaningful. And expect to find yourself doing a good deal of stomach and jaw clenching.

(The Thirteenth Commandment plays at The Bridge Theatre at Shetler Studios, 244 West 54th Street, 12th Floor, through may 5, 2013. Performances are Wednesdays at 8PM; Thursdays at 8PM; Fridays at 8PM; Saturdays at 2PM and 8PM and Sundays at 2PM. Tickets are $15 and are available at artful.ly/store/events/982. For more show info visit libratheatre.org.)