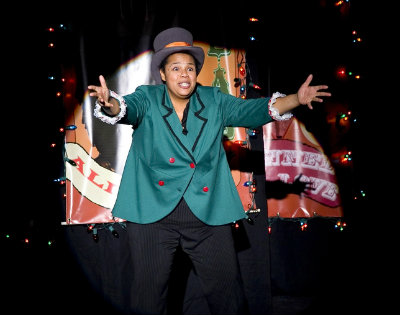 BOTTOM LINE: Don't call her sassy, but do come ready to be entertained, challenged, interrogated, and dragged on stage -- we've got some issues to work out.

What exactly is a “tar baby?” The phrase may not mean what you think it does. That confusion is the premise around which Desiree Burch weaves her (almost) one-woman show of the same name. Written by Burch with collaborator Dan Kitrosser, Tar Baby is a sticky mixture of stand-up comedy, audience participation, monologue and even minstrelsy. As that description might suggest, there are very few boundaries here.

Burch performs on a set designed to look like a carnival and even envelops the audience in a circus tent as she tells stories about her life as a highly-educated yet underestimated woman of color. As a black woman who studied theater at Yale, it’s not often I see a show written and performed by another black woman who studied theater at Yale, so there were laughs aplenty for me as Burch shared anecdotes that mirrored my own experience. However, my fellow audience members, mostly white, were drawn in as well, judging from their enthusiastic responses. Burch works up a sweat, performing for 90 minutes straight and frequently plucking folks from the audience to join her on stage. Those with delicate sensibilities will be squirming in their seats: Burch uses the “N-word” more than a few times, is assisted by a sidekick she calls her “White Slave,” and forces hapless “volunteers” to crawl across the stage picking up cotton balls in an absurdist recreation of American plantation culture.

Like the topic of race itself, Tar Baby gets more complicated the more one tries to discuss it, which is both a strength and a weakness. The multifaceted nature of American racism, and of Burch’s experience, means that every time you think you can predict where the show is going, it can take an unexpected turn. However, the ride is sometimes bumpier and ultimately a little longer than necessary. Burch is at her best when performing one of her beautifully crafted mini-scenes (a “dialogue” between “Siamese twins” is especially strong); when she veers into less-scripted territory, the results are mixed.

Tar Baby is a sometimes brilliant, frequently hilarious and poignant experience. Theatergoers seeking something comfortable and straightforward should stay away. At this show, you will be part of the action, perhaps even pulled from your seat to join Burch’s emotional journey. You might be an ally, you might be a foe...you might be both. Once you touch the “tar baby,” it sticks with you.