$15 with a membership to Prospect Theater Company

Tamar of the River 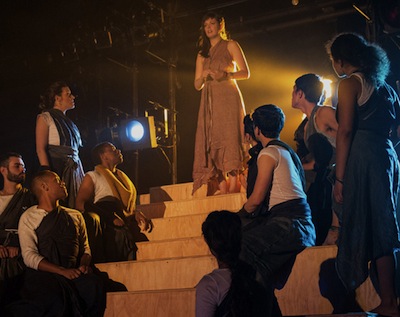 Margo Seibert and the cast of TAMAR OF THE RIVER.

BOTTOM LINE: A beautiful and befuddling tale inspired by the biblical parable of Tamar and Judah, that overstays its welcome but is an arresting theatrical adventure nonetheless.

Liturgically, the story of Tamar and Judah (Genesis, Chapter 38) has aught to do with anything other than lineage; the Bible interrupts its narrative on Joseph being sold into slavery in Egypt with the story of Tamar to establish the progenitors of King David. The union of Judah and Tamar produced Peretz, named as David's forefather. Other than everyone having the same name and some plot point similarities, Tamar of the River is worlds away from Tamar of the Bible.

The show (produced by Prospect Theater Company) follows the trials and tribulations of a Tamar (ably played and majestically sung by Margo Seibert) who hails from the nebulous and metaphorically-laden "East." She hears the voice of the River (an actual physical river dividing her homeland from the numerically superior "West" -- and they've been at war for generations). The River (the ensemble, led by the ethereal and powerful voice of Margo Bassett as the River Angel) commands her to cross into the land of the West, and settle in the house of Judah (played by gruff and bare-chested Erik Lochtefeld) in an effort to bring peace to the lands divided by both river and un-ending war. She follows the River's voice to the Judah's house, and bids to create peace. Her efforts, while at first appreciated, eventually meet with tragedy and disaster; as her connection with the prophecy from the River fades away, she feels the primal call of violence and fear she's been fighting against, and we come face to face with our own frailty and inconsequence as Tamar struggles to re-connect with the River Angel and know her purpose once again.

Tamar of the River is a phenomenal effort of beauty. Operatic in reach and style, everything is a grand gesture and thusly, your senses need time to adjust to the peculiar storytelling; like watching Shakespeare, opera or performance art, your brain needs five minutes to adjust to the language. It feels wrong to call it a Musical; the music is not just serving a narrative or emotive purpose, but also acts as pure texture, creating tangible, physical scenic and time changes. Composer and co-writer Marisa Michelson and her fellow orchestrators Matt Aument (also the show's musical director) and Shane Shanahan, ought to recieve all the kudos possible. Thier work, heavily influenced by Jewish liturgical service and Ofra Haza/Yemeni or Arab chanting (if I had to hazard an un-educated guess) is both other-worldly and familiar, warm and cold, frenetic and controlled. It's extraordinary, and worth the price of admission alone -- even writing about it, I'm re-amazed all over again.

The direction by Daniel Goldstein and choreography by Chase Brock are well suited to the piece and to the music, perfectly complementing the strange and compelling tone with strange and compelling staging and movement. Grand gestures need grand staging, and it is provided in spades. The ensemble and leads all do superlative work, the design clever and well-suited, using simple gestures to support the grand movement, music, and direction, and the combined efforts of everyone involved left me thinking about the work for days.

There is no question that Tamar of the River is an arresting and sensual threatrical piece. A grand gesture in the greatest tradition of grand gestures. The only thing I question is the book. There are moments and movements where I felt the gesture overstayed its welcome, places where the plot dragged, and woven throughout the show is a jarring disparity of tone between music and spoken word. Cutesy, modern one-liners come out of nowhere in the middle of a timeless movement. I believe these intentional tonal shifts are meant as negative space, a breathing space for the audience to let go of the opera and just laugh. It may work for others, but it didn't always work for me. Finally, the book lingered here and there, becoming precious and slow occasionally, weighing down moments that didn't need weight, taking too much time in certain songs/musical movements, and I found myself mentally wishing the show would hurry up and close the deal a few times in the latter half. Grand gestures, like critical reviews, are always better short and to the point.

My critical thoughts on book aside: in the grandest tradition of grand gestures, Tamar of the River shoots for the moon. How often can you pay only $50 to travel to another world?

(Tamar of the River plays at Baruch Performing Arts Center, 55 Lexington Ave, through October 20, 2013. Performances are Tuesdays and Wednesdays at 7:30PM; Thursdays through Saturdays at 8PM; and Sundays at 3PM. Tickets are $50-$65, or $15 with a membership to Prospect Theater Company, and are available at prospecttheater.org or by calling 212-352-3101. For more show info visit or tamaroftheriver.com.)