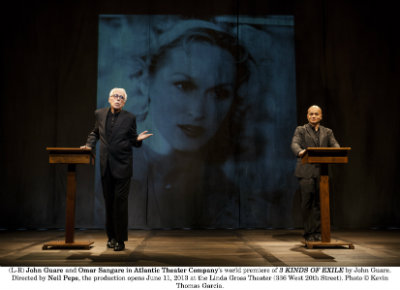 John Guare’s 3 Kinds of Exile is an experiment in storytelling. The piece consists of three short plays, all presented in different styles but connected by similar themes. The first play features Martin Moran as an Actor alone on stage, telling a story. There are no props, aside from a single chair. It is simple and the story is profound. This piece in particular highlights Mr. Guare’s masterful use of lyricism in his language. The story the Actor tells is poetic and fascinating. It is the story of a friend of his who once had a red rash that grew until it covered his whole body, save for his hands and face. The Actor tells how his friend progressed from doctor to doctor seeking a cure for his strange ailment. Eventually looking to a psychiatrist for help, the Actor’s friend relives a memory from his childhood that has haunted him ever since. Moran tells the story simply, without flourish, and in that simplicity he captures the imagination. This first play in 3 Kinds of Exile reminds me of the theatre that existed before the sort of theatre we know today. It’s like Homer telling the story of the Odyssey to listeners around a campfire. It is a theatre of the mind and within this first play Mr. Guare’s text owns that space.

The second play features Mr. Guare himself (in his stage debut) along with Omar Sangare as narrators telling the true story of Elzbieta Czyzewska, a Polish actress who moved to America in the 1960s and found herself fighting to keep her career afloat. Her tragic story, which at some points involves Mr. Guare directly, is really one of bad luck. As a young actress Ms. Czyzewska was loved and revered in her country. But after she married David Halberstam, a journalist for The New York Times, she moved to New York City and was never able to recapture the fame and adoration she once held in her country. Her career turned into an uphill battle complete with drunken escapades, repeatedly being overlooked for roles she was perfectly suited for, and even being fired by Mr. Guare at the request of his director. The narrators perform the piece with the utmost empathy for Ms. Czyzewska, as clearly Mr. Guare believed in her talent and was one of her good friends. The two speakers toss the narrative around smoothly and her tragic tale is delivered with respect.

The final play is a bizarre, dreamlike story of the Polish writer Witold Gombrowicz’s (David Pittu) journey to Argentina in 1939. While there, he learns that Poland is at war with Germany, the start of WWII. After he receives this information the story turns into a complex dreamworld that ultimately ends as a nightmare. The plot derails from any real cohesion and becomes a haphazard tale about Gombrowicz being forced into an unwanted marriage. Subsequently he is told he has to be killed that day as well, to make it a “Funiage” (Funeral + Marriage). The story becomes muddled and the lack of clarity makes empathy for the protagonist a difficult task. The dreamscape breakdown becomes so incoherent at times it undermines the entire third play, separating it from the linear and grounded poetry of Mr. Guare's first two plays.

3 Kinds of Exile contains many beautiful moments but ultimately it is an inherent fear and sadness that dwells in all of us that Mr. Guare explores the most. His words and Neil Pepe’s strength of simple direction make 3 Kinds of Exile a thought-provoking exploration of exile and lonliness.