$30 and midnight performance tickets are $35 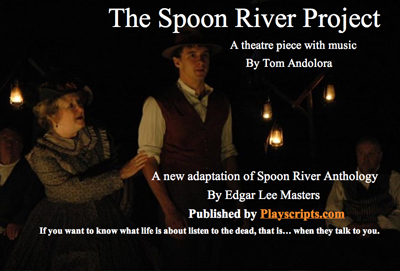 As we walked through Green-Wood Cemetery, I was struck by how peaceful I felt—this was not at all the ghoulish, terror-filled stuff of horror films, but the quiet and serene resting place of hundreds of thousands of souls now interred in one of the first rural cemeteries of New York. And when we arrived at a small clearing of grass amidst a spattering of gravestones, the audience sat and waited, as darkness overtook us, for The Spoon River Project to begin.

The Spoon River Project is a theatrical adaptation of an anthology of short, free-form poems by Chicago-lawyer Edgar Lee Masters published in 1915. Masters wanted to reflect on the small-town life of his childhood in Lewistown and Petersburg, Illinois, especially the hypocrisy and secrets of the villagers around whom he was raised. He thus created the fictional town of Spoon River (the name of a real river near his boyhood homes) and peopled it with a couple hundred inhabitants, some based on his memory, some completely made-up. The anthology, however, was not a collection of their remembrances or their stories, but rather a compilation of their epitaphs—the dead, after all, have no need to lie and no recourse to change the past. Truth can, therefore, prevail.

This adaptation, lovingly pieced together by director Tom Andolora, brings together 11 actors to recite (and at times sing) these epitaphs to elucidate the relationships between these deceased townsfolk. A trio of musicians, seated outside of the audience’s view, at times accompanies the ensemble, and a pair of dancers appears for the briefest of moments. Dramatizing poetry is risky business as actors are in a susceptible trap of either over-dramatizing or over-voicing the poem and in both cases the pathos—and in some cases ethos—of the poetry suffers.

While this ensemble is at times victim of this pitfall, their exuberance for and reverence to Masters’ poetry is apparent. They may have also been attempting to overcompensate for live music being blasted through speakers, which might have been deemed necessary due to an occasional plane flying overhead. I felt one of the most beautiful moments occurred when actor/musician Mark Lanham played the harmonica (unamplified and in full view of the audience) while Susan Cohen DeStefano related, simply, the story of a woman asking President Lincoln to pardon her sick son from military service.  Nicholas Paul Webber also brought a much welcome humanity to his characters, finding a good balance between speaking the speech and inhabiting each Spoon River resident.

It was difficult, if not impossible, to connect the disparate stories to one another, if not only because the actors were portraying so many characters. But taken as a collection of remembrances rather than as a dramatic story, The Spoon River Project was still pleasantly nostalgic and intellectually enlightening. One gets a sense of not only for the lives of these people, but also the lessons learned, the loves unfulfilled, and the wishes granted. And in the end, no matter their lot in life, they “all, all are sleeping, sleeping, sleeping on the hill.”

(The Spoon River Project plays at the Green-Wood Cemetery, 500 25th Street, Brooklyn through June 30, 2012. Performances are Thursdays through Saturdays at 8:30PM, Sunday the 23rd at 3:30PM; and Sunday the 30th at 3:30PM. Additional midnight performances with a catacomb tour at 11:30PM on both Saturdays. Most tickets are $30 and midnight performance tickets are $35 and can be purchased at green-wood.com or by calling 718-210-3071. For more show info visit TheSpoonRiverProject.com.)