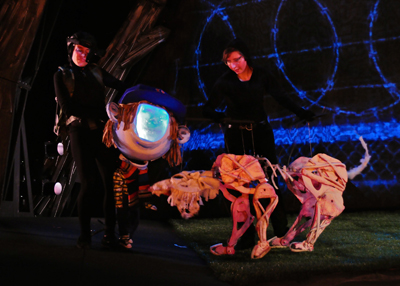 Caroline Tamas as Big Headed Toddler and Claire Moodey as Ghost Dog in THE SERVICE ROAD. Photo by Andrew Puccio.

Tucked away in an unmarked building under construction, on an empty block just south of the BQE in Brooklyn, is the New York City College of Technology’s Voorhees Theatre. If getting to the theatre requires a sense of adventure, it sets you up quite appropriately for the magical world you encounter once inside. Erin Courtney's The Service Road is a visceral treat, and the designers make good use of the Voorhees's traditional yet cavernous space to house the tale.

The Service Road is kind of a mystery, part real and part fantastical. Lia (Kalle Macrides) is a tour guide at Prospect Park and she leads nature hikes in what appears to be a volunteer position. When a big storm suddenly blows through the park, trees come down and out of the rubble appears a lost little boy and a we're-not-in-Kansas-anymore vibe. Lia is determined to find the boy, and what transpires is a journey through the park; Lia is eventually joined by Gus (Cory Einbinder), a construction guy with a crush who is glad to lend a hand. As they venture off the service road in search of the boy, Lia reveals some information about herself that uncovers a dark secret from her childhood.

The production is a highly creative endeavor, and although the cast consists of only two actors -- Einbinder plays several other park people -- puppets are utilized for some other haunting creatures. Caroline Tamas and Claire Moodey bring to life the lost little boy, a big boney dog, and three creepy kid eggs that live in a tree and know too much about Lia and her psychological makeup. Einbinder designed the puppets, and with real video faces breathing an eerie vitality to the characters they add a unique dimension.

Just as cool is the live sound production by Moodey and Mark Bruckner (also the composer and sound designer). Upon entering the theatre, the ominous soundscape become apparent with the two already going at it at their full-view sound booth on the side of the stage. And it's a good thing the audience can see them, because it's very fun to watch them before the show begins and then throughout the performance as they use instruments and objects to create a vivd background for the world of the play. The addition of live foley exposes the artistic strings and brings the audience further into the journey. It's also just damn impressive.

Though The Service Road is a technical goldmine (Sue Brandt's lighting design and Einbinder's video design included), it's clear that not as much energy was spent on the story itself. Erin Courtney's alluring script is a warped fairy tale, ripe for the picking and full of imagery and metaphor. A dramaturg would have a fantastic time in that playground. Unfortunately, the production doesn't do much by way of storytelling, at least beyond what's spelled out on the page. The performances are servicable, but the puppets come to life much more than the human characters do. The entry point to this production is through its technical accomplishments, not through the characters and their struggles.

The Service Road is a finely produced piece of theatre and a delightful one to experience. There is much to grab your attention and keep you rapt, as the visual and aural elements are pretty much consistently engaging. Lovers of art and technology would be wise to visit The Service Road.