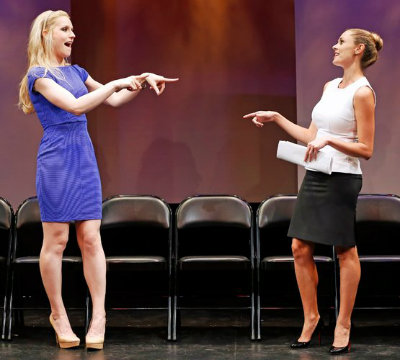 Gia Crovatin and Elizabeth Masucci in GOOD LUCK (IN FARSI).Photo by Carol Rosegg.

BOTTOM LINE: The first half of 59E59's Summer Shorts Series features three comedic works, two that stay rooted in reality and one that is lost in satirical fantasy. While some are stronger and more thought-provoking than others, they all make for an entertaining evening.

Good Luck (In Farsi) Written and Directed by Neil LaBute

In the opening short play, playwright Neil LaBute (who also directs), takes a break from his darker themes and turns to comedy. The play centers on two hopeful young actors who are both auditioning for the same role. Kate (Gia Crovatin) is a (stereotypically) ditzy blonde who has invested everything she has in her acting career, convincing her parents to pay for her apartment while she pursues her dream. Kate marches her long legs up and down the casting office waiting room while she rehearses her lines and laughably exercises her (rather large) tongue. Her confidence however is shattered by the arrival of Paige (Elizabeth Masucci), a more successful actress. The two women soon are trading backhanded compliments and laughably kvetching about how hard life is for them because they were born gorgeous.

Good Luck (In Farsi) lampoons the vain and competitive world of acting in a way that feels authentic, especially when the script ventures into the girls' cluelessness towards the Middle East. While the characters are cartoonish, they also feel like realistic caricatures. Both actors shine in their roles, particularily Gia Crovatin, who has a knack for physical comedy.

About A Woman Named Sarah By Lucas Hnath; Directed by Eric Hoff

When Sarah Palin ran for vice president in 2008, her ineptness and inarticulateness rendered her instant comedic gold, with Tina Fey doing a spot-on impersonation that forever deemed Palin a political laughing stock. HBO even made their own movie about Palin that went beyond just the laugh worthy material. If Lucas Hnath's play had debuted in this same time frame it may well have seemed tired. However, years later, with Obama in his second term, revisiting the ridiculousness that is Sarah Palin somehow feels fresh. None of the actors give spot on impersonations (actor Marisa Viola does not attempt to don an Alaskan accent and does not even unleash a single "You Betcha!") Rather, the play looks at the conflicts present at the time when John McCain chose Sarah Palin as his running mate.

The play centers on the day when McCain (Mark Elliot Wilson) and his wife Cindy (Stephanie Cannon) met with Palin and her husband Todd (Ben Vigus). In one of the play's most compelling scenes, Cindy meets with Sarah alone and tells her not to run. She asks Sarah about the political and governmental knowledge and is given clueless answers. Cindy tells Sarah that she was chosen for "reasons that are all outside reasons." In another compelling scene, John expresses his fear of being a big loser, noting that no one will be his running mate as they all think he is going to lose. Cindy reveals that John's poor political choices have made her less attracted to him sexually.

Hnath's script is unusual, and has a wry sense of nuanced humor. The play's dialogue is delivered in short, interrupted spurts, with claps signalling scene changes, all choices that make About A Woman Named Sarah stand out among the others in this series. The actors, especially Marisa Viola, all convincingly convey their characters' vulnerabilities. Of the trio of plays, I found this one to be the most intriguing.

Breaking the Spell by Tina Howe; Directed by Birgitta Victorson

In this fantastical short play, Howe reimagines the "Sleeping Beauty" fairytale, turning the story into a tale of a king (Michael Countryman) and a jester (Evan Shinners) who must attempt to awake Christabel (Crystal Finn) in order to break a spell. The Jester suggests they use music to break the spell and are visted by a down-on-his-luck saxophonist (Jesse Scheinin) and a trio of quirky musicians (all played by Evan Shinners.) The story does not feel as fresh or as original as the other plays in the trio, but it does provide a nice means for Evan Shinners to display his talent as both an actor and a versatile musician. The play's many rousing musical numbers left the audience in high spirits.