Written and Directed by Regina Taylor 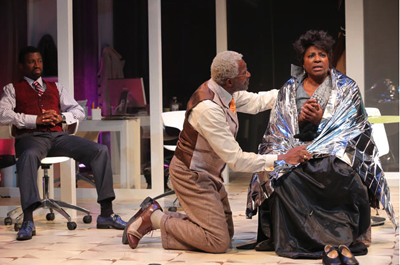 BOTTOM LINE: Alexander Ames is a venerated Black publisher in Chicago who cannot keep up with the technological advancements surrounding him, due in part to his age and his slow return after a stroke and the loss of his only son.

Regina Taylor introduces us to a snowy Chicago reminiscent of New York in the movie The Day After Tomorrow or maybe even New York in Planet of the Apes. Though the city is not under any obscene attack the winds of the weather give ample symbolism for the catatonic meaning of “changing tides.” At Alexander Ames' Chicago Black Book Publishing history is revered, yet with the onset of so many outside changes history may be obsolete. The struggling publishing house swirls with devious employees attempting to save their jobs while undercutting one another. Its owner, Alexander Ames (Carl Lumbly), still a pedestal of honor in the wake of possible layoffs, decides to elevate the mysteriously youthful janitor J (Ismael Cruz Córdova), who appears out of the blue. With the freezing cold keeping the characters inside and the worry of joblessness keeping them inside as well, many elements combine for a perfect storm of the old versus new and the weak versus strong.

However, that’s not all. The play circumvents the Ames’ Book Publishing house closure with a lengthy argument for the solidity of books. The script is an amalgam of odious monologues and emotional, archaic anecdotes about Brer Rabbit. Being based in a book nook, the rush of words becomes justified. The audience is searching for answers as much as the characters are, really. J represents the not-so-distant future as he projects visions of bodiless communication while the venerable Ames extols tactile pages. The contention is well known as major newspapers lighten their production of “the times” and resort to online features; where three-year-olds know how to facilitate iPads as if they were real books and magazines.

We are coming to the intangible world — a difficult topic which cannot be holistically addressed in two hours, perhaps. The play nobly attempts to present its multitudinous arcs, giving its multicultural cast free range to discuss race and image, sex and politics. Coupled with a dazzlingly technological set by Nick Patel, stop.reset. transforms into its subject: an untouchable space of dialogue. The play makes one want to stop — relate — and reset.