Off Off Broadway, Immersive Theatre
Runs through 6.3.13
"A Secret Location" (on the LES) 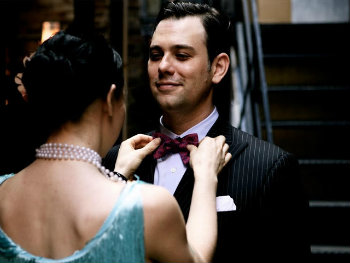 BOTTOM LINE: Somewhere in a murky mist of iPhones and phonographs, this totally immersive theatre piece asks much of the audience and delivers a frisky few hours to those not afraid to mingle or drop a little dough.

Come inside, have a cannoli, maybe play a few hands of cards with the boys. Don’t gamble? That’s quite alright, just try the “special” coffee in the back room and have yourself a good time. But remember to speak easy, because it’s all fun and games here until someone gets hurt, and unfortunately, that someone happens to be somebody’s grandfather. Cynthia von Buhler’s, to be exact. Join her attempts to piece together clues in her investigative immersion theatre piece, Speakeasy Dollhouse, playing twice each month in the Lower East Side.

Inspired by the true and still-mysterious events of her grandfather’s 1935 murder, Cynthia von Buhler has recreated the places and events surrounding her grandfather’s death in the hopes that perhaps some new light will be shed on the proceedings. Following the work of Frances Glessner Lee, mid-1930s crime scene investigation revolutionizer, von Buhler similarly crafted scenes of interest first as dollhouse miniatures, as accurately as possible, to enable closer examination of the elements and details without the inevitable distraction and duplicity of human contact. Once achieved, von Buhler transitioned her research into a life-size model, throwing in actors and audiences as dolls and would-be tinkerers loosed in rooms full of potential evidence. Rooms include her grandparent's bakery and back bar (both of which were speakeasies), a coroner's office, a barbershop, and the apartment in which her grandmother gave birth.

Suffice to say the classic division between performance and audience is nonexistent here. Most resembling Sleep No More (which is acknowledged as inspiration), von Buhler’s rendition of immersive theatre is messier and tenfold more interactive. Not merely following the action, thanks to the very contained space and hours-long running time, audience members must root around for information and interest, lest they find themselves merely sitting around in the main bar, nursing whatever poison their teacup holds, which can be done at a less expensive establishment without the price of admission. Rules are there ain’t no rules, but the adjustment period for delving into the dollhouse with noses at the ready may be different for all.

Ripe for those apt explorers, the setting dutifully evokes the ornate titular dollhouse, striking a balance between innumerable tactile tchotchkes to fondle and an inescapable sense of limited mobility -- only so many doors lead to only so many places and we dolls have only so many exploratory opportunities afforded to us. What seems like a never-ending stream of people cram into every nook of the 5-room set, like so many strangers on the train during rush hour, many of whom have arrived in costume with their wits and willingness at the ready, to schmooze and speak easy until the cops come.

Here, the broken theatricality becomes interesting. Often jumping ahead of the story, or precipitating drama thanks to a single actor’s suggestions, audience members become bearers of bad news, rumormongers, and vitriolic members of the jury. Von Buhler has left an expanse for the audience to fill, which would be more delightfully dangerous had she trusted more in the unflagging human need to explore. Instead, she over-prepares audiences with an arsenal of informative emails and programs packed with source material and storyline in advance of visiting the dollhouse. Von Buhler’s concern for mystery and exploration, perhaps, are sublimated by her desire to discover more about her grandfather’s murder, but these safety nets end up suffocating genuine creative exploration.

Further complicating the attempt for authenticity is the ever-present shadow, or glow rather, of contemporary culture: the inescapable presence of the smart phone. Flashes of cell-phone cameras and the white-lights of text screens continuously disturb the dim, honey-toned lighting, incapacitating both retinas and room for legitimate recreation. Von Buhler encourages phone usage throughout as she live tweets clues and suggestions, though opening up the opportunity to use devices for one purpose has snowballed into an anything-goes, never-ending stream of phones-in-hand. Instead of merely engaging with the material, audience members seem hell-bent on capturing and qualifying all evidence through technology once given the permission to use it at all. Perhaps von Buhler can find some productive way to harness these photos and videos instead of merely allowing for them to continuously chip away at the fragile and precious veneer she’s cobbled together. At the very least it offers a secondary function to the evening’s affairs: a steady commentary on a contemporary audience’s ability to fully engage with immersive work and how “fully” seems inevitably to include a technological sieve through which experiences must travel.

Ultimately, Speakeasy Dollhouse is an amusing and beautifully crafted piece of boutique immersion theatre, though should be far shorter than its three-hour running time and enable far fewer audience easy-outs.

(Speakeasy Dollhouse plays at "A Secret Location" (on the LES), through June 3, 2013. Performances are during first week of the month on Saturdays at 4PM and Mondays at 7:30PM. Tickets are $30-$250 and are available at brownpapertickets.com. More information available at speakeasydollhouse.com.)