Use code MATINEE1 to get $20 tickets for the Saturday and Sunday matinees. 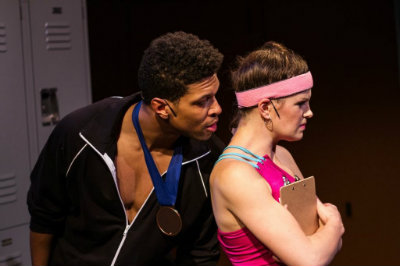 BOTTOM LINE: A gut-buster about gut-blasting, its infectious music and a fabulous cast make Spandex a good-time musical that delivers just that.

In the new musical Spandex, the hilarity is no stretch. This power ballad-packed two hours of self discovery and aerobics will get your heart pumping and your toes tapping. In Spandex, every person has the chance to be the best you you can be, and you’ll leave the theatre wrapped tight in that same sentiment.

Lorraine (Sims Lamason) and Tripp (Jaquez Sims) where Olympians together where she choked and he medaled, now Tripp runs an aerobics empire and Lorraine is its underappreciated heart. Housewife Linda (Jerielle Morwitz) is neglected by her husband (Brian Drummy) and eclipsed by her family’s needs until she joins Lorraine’s class and learns that with aerobics anyone can fly. Meanwhile Tripp wants to expand his business by launching a line of questionable diet pills, and newcomer Israeli fitness guru Dov (Will Boyajian) makes a pilgrimage to Tripp’s gym and falls for Lorraine. Things get messy when Linda’s newfound sense of self threatens her marriage, Lorraine goes toe-to-toe with Tripp over his dangerous dolls, and Dov tries to win Lorraine’s heart. All comes to a head at the 1987 Crystal Light National Aerobics Championship hosted by Alan Thicke. (Can you imagine a better finale? It’s stunning.)

Building on the tradition of cotton-candy camp musicals like Xanadu and Hairspray that wink to the audience and to the trends of a recent decade, Spandex sports a charming book by Daniel F. Levin and Annie Grunow and catchy, riveting music by Julian Blackmore. The production is cleverly staged by directors Andrea Andresakis and Liz Piccoli with Piccoli contributing brilliant and inventive choreography that draws from fitness movements and utilizes intricate pathways and formations to create sparkling group numbers in the limited space. Within those limitations of a smaller playing space and off Broadway budget, we are shown the outline of the big, flashy musical Spandex is meant to be by Larry Taylor’s innovative set design, jazzy costumes by Dustin Cross, dynamic lighting by Christian DeAngelis, a funky, full sound design by Kai Harada, and the multipurpose use of SPANDEX!

This tight, shiny show is performed by a stupendous cast of bright young talents who dance, tumble, and belt their faces off. Jaquez Sims delivers impeccable comic timing and a magnetic stage presence, Jerielle Morwitz is warm and sympathetic, Zachary Karon shines on stage with optimistic energy, Rose Ouellette is equally fabulous whether bringing spaz or sass, and Paige Sommerer threatens to steal the show with her lesbiandrogynous schtick. Sims Lamason DOES steal the show by force of sheer charisma and energy as the (arguable) heroine, and the sexy and funny Will Boyajian proves a fresh new find (recently imported from Ithaca’s BFA program). This production of Spandex reaffirms that New York City still hosts the premier musical theatre talent of the world.

Spandex is a great new musical with a fabulous score and a killer ensemble. The musical is silly and it knows it, but between the loveable characters and the engrossing narrative, I was fully invested and genuinely moved. The audience literally left singing the title song, and this audience member is still singing it two days later!