$18 for general admission
$15 for students/seniors/LIC Residents

Wednesdays: buy one, get on free

Thursdays: pay what you can 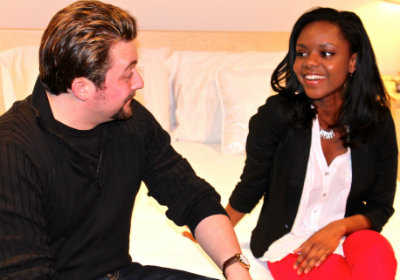 Kirk Gostkowski and Ashleigh Murray in SOME GIRL(S). Photo by Olivia Nolan.

Some Girl(s), by design, is not an easy play. The structure is unusual in that it features one man in five scenes with five different women. Each scene operates as a vignette, piecing together the story of a man with a history of relationship misdemeanors and the repercussions of those actions, sometimes as late as 15 years after the fact. Neil LaBute’s play is challenging, thought provoking, and brimming with enough awkward pauses and overlapping lines to put even the most natural of actors to the test. Fortunately for Variations Theatre Group the cast accepts the challenge and brings this man’s journey to life in a pleasing production.

The play begins with Guy (Kirk Gostkowski) in a hotel room awaiting his high school ex’s arrival. Sam (Amber Bogdewiecz) shows up a little flustered, scattered and very curious as to why her ex boyfriend from high school would contact her after so many years. She is a married woman and a mother now and feels as though she has moved past any qualms about their relationship years ago. After a meandering conversation that roams from cashews from the mini-bar to the weather he finally gets to the point. He wants to make sure there are no hard feelings for the way he ended things with her as he is about to get married and feels the need to make amends for any wrongs from his past relationships. This is the crux of the play and the theme of essentially every scene, with the exception of one in which he ends up confronted by an old friend’s sister for an illicit action from their past that he clearly wasn’t ready to apologize for. Considering Guy’s motive for every scene is the same, or so we think until the final scene when a secret is revealed that causes the audience to question the sincerity of his actions over the past two hours, Gostkowski keeps the character varied and interesting and I never tired of his performance of a man who can be simultaneously sniveling and charming.

As for the five female characters, I felt they were all performed with sincerity and commitment. The second act, containing the final two encounters, was the most profound and emotionally charged of the play. Jacyln Sokol and Jill Durso perform them well. Sokol, in particular, handles the character’s suppressed emotions of being molested as a child with care, subtlety and just the right amount of merited anger toward the man who forced her to grow up faster than she ever should have.

In the final scene Guy, has a fantastic monologue that weaves in and out of making excuses, shifting blame, professing love, backpedaling, and begging; Gostkowski nails these down in such a way that I absolutely hated and felt for the character at the same time. That’s a great feeling and one that I’m sure Mr. LaBute was aiming for when he penned the script. Some Girl(s) is a tight show with solid performances all around. It’s definitely worth checking out if you are a fan of Mr. LaBute’s work and/or looking to see some committed actors playing complex contemporary characters with a certain simplicity that works well and reads very realistically.

(Some Girl(s) plays at The Chain Theatre, 21-28 45th Rd., Long Island City, through May 18, 2013. Performances are Wednesdays through Fridays at 8PM; Saturdays at 2PM and 8PM; and Sundays at 2PM. Wednesdays are Buy One, Get One Free Night and Thursdays are Pay What You Can Night. Tickets are $18 for general admission or $15 for students/seniors/LIC Residents and are available by calling 646-580-6003 or visiting www.variationstheatregroup.com.)