By Jaclyn Backhaus; Directed by Andrew Neisler
Part of (not just) 3 NEW PLAYS 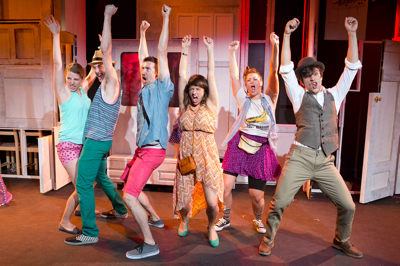 The cast of SHOOT THE FREAK. Photo by Hunter Canning.

BOTTOM LINE: This rollercoaster (literal and metaphorical) of a play engages in surprising ways with every inventive turn, and features a dynamic ensemble full of colorful performances.

Jaclyn Backhaus’ theatrically inventive new play Shoot the Freak feels a little bit like an episode of HBO’s Girls on acid, complete with bright, Technicolor costumes, dance breaks and a group of twenty-something’s trying to reconnect in Brooklyn’s Coney Island. Though stories about nostalgic hipsters longing for the past and trying to figure out who they are now may sometimes seems overdone, Backhaus’ unique voice and theatrical experiments make this play a fresh take on a tried and true story.

The play begins when Franny (Ryann Weir) assembles a group of her friends to get together and relive one of the greatest memories in their collective history, the summer of 1996, specifically the day they all went to Coney Island. Franny is joined by Grant (Jamie Effros), who it seems she has been pining over for years, and their two recently engaged friends Earl (Ben Otto) and Jessie (Claire Rothrock). Everyone is set to go until the arrival of Allison (Sarah Todes) quickly changes everyone’s mood. You see, in the summer of 1996 Grant and Allison were dating, and after she broke his heart, she didn’t really stay in touch with the group. Allison shows up with Marco (Maxwell Eddy), an Italian visitor and new sort of beau. As if that wasn’t enough, the loud, ominous thunder outside threatens to ruin their summer day.

Over the next hour we see this group try to reconnect, but instead learn the painful realization that the past is nothing more than a nostalgic memory, that things can’t be the way they used to be. Nathan’s is closed. Rides have been bulldozed. A storm is drawing nearer, and no one can find the “shoot the freak” guy. Nothing is as it should, especially their relationships. Realizing that no one really wants to be there, that no one really does care all that much about Franny, Grant questions why anyone is even there. “You know why I wanted to come on this trip? Because in 2006, it was fun to be around you.”

Though at this point, the plotting is thin, setting the play in Coney Island does two beautiful things for Backhaus’ work. First, it reminds you of the universality of nostalgia and change; after all, what New Yorker have you met who doesn’t think New York was better when they first got here, and longs for a better time, when things were simpler? Second, it allows Backhaus to show off her whimsical imagination. The final third of the play turns into a fever dream complete with a speedboat rescue and a staged rollercoaster dive, that makes the whole hour worth it.

Throughout the play, we get to meet various figures played by the cast: a stuffed turkey, Skip Darlington the weatherman, and a wax child to name a few. It is in these moments when the production truly shines, combining Backhaus’ innovative metaphors, with director Andrew Neisler’s inventive staging. I was also quite taken by the design, particularly the cabinet of wonders-like set by Andy Yanni (especially wonderful in the museum sequence), and the trippy music video-like costume design by Meghan Gaber. The cast does especially well committing to their various characters, particularly the charming and grounded Jamie Effros, a side splitting Ben Otto, and the tragic but hilarious Ryann Weir.

(not just) 3 NEW PLAYS, the name of the festival debuting Shoot the Freak, proves that the downtown scene is still the place for innovative work, where young artists can get together without anyone else’s permission and make work as interesting as anything above 14th Street. Young artists longing to reinvent the magic of the now imploded 13p and the still highlight of any summer, Clubbed Thumb, need only to look to these artists as a model inspiration.

(Shoot the Freak plays at Tom Noonan's Paradise Factory, 65 East 4th Street, through September 29, 2013. Performances are Tuesdays at 7PM; Thursdays at 9PM; Saturdays at 5PM and Sundays at 8PM. Tickets are $18 and are available at brownpapertickets.com. For more info visit notjust3newplays.com.)