Set in the Living Room of a Small Town American Play

Off Off Broadway, New Play
Runs through 3.9.13
Walkerspace, 46 Walker Street 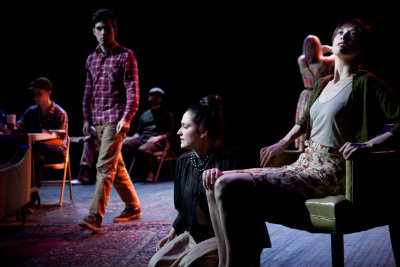 BOTTOM LINE: A superb ensemble deftly and imaginatively explores archetypes and themes common in theatre of the American post-war era.

Theater Reconstruction Ensemble’s Set in the Living Room of a Small Town American Play is at times a staged rehearsal, a satire of “realistic acting,” a legitimate drama, and an intellectual playground for both the audience and the performers. The members of the ensemble, led by artistic director John Kurzynowski, have their work cut out for them staging what they call “an epic dissection of the American REAL” but they rise to the challenge and exceed expectations as they cover every aspect of a typical post-war American play with intelligence and confidence.

The stage is bare at curtain save for a table with scripts lying on it surrounded by metal chairs. It looks like it is set up for a table read rehearsal. As the actors enter the stage it is apparent that that is exactly what it is -- or that is to say -- a pre-rehearsed “rehearsal” of the play. Sound designer Kate Marvin sits silently running sound from a laptop on the table as Nick Smerkanich reads all the stage directions directly out of the script. This device continues throughout the entire play as the actors slowly transition from rehearsing the piece, complete with breaking character to ask questions like, “what’s the Wi-Fi password?” to becoming truly immersed in the world created by playwright and fellow actor Jaclyn Backhaus. At times there are so many levels of meta-theatre happening it is as if two plays are occurring simultaneously: the story of the Lorimer family’s prodigal son returning home after a fatal accident and the overarching story of a troupe of contemporary actors working through text that explores the staples of a 1950s American play.

The world of the play is replete with stock American characters: the doting secretly alcoholic mother, the failing father figure clinging to the American dream, the nosey hyper-religious neighbor, the high school sweetheart, it’s all there. The story goes that Patrick Lorimer returns home to find his family, and town for that matter, on the edge of exploding with secrets, deceptions, and brokenness. The dialogue is so impeccably written in the speech of that era it could have just as easily been taken directly from the pages of a Tennessee Williams or Arthur Miller classic. As the stage directions are read throughout the piece it is as if a novel is being acted out before us, the poetry of the language of that time period is not lost on Backhaus and Nick Smerkanich delivers it beautifully.

Another strength of Set in the Living Room… is the direction. Kurzynowski manages to weave the actors throughout the stage as if the whole piece were a dream ballet. Combine that with the risky and bold choices made by the actors doing whole scenes in slow motion or speeding through as if running lines in rehearsal and you get the a kind of experimental theatre that is highly entertaining to watch. Lighting and set designer Jonathan Cottle’s lights, along with Marvin’s sound, can be thanked for creating a nostalgic environment that takes the audience to that simpler, yet clearly just as emotionally complex time.  All together Theater Reconstruction Ensemble’s piece is a surprising, fascinating, and engaging work of art that causes us to reflect on post-war America and ask if we’ve really changed that much since.

(Set in the Living Room of a Small Town American Play plays at Walkerspace, 46 Walker Street, through March 9, 2013. Performances are Wednesdays through Fridays at 8PM; Saturdays at 2PM and 8PM; and Sundays at 7PM. Tickets are $18 and are available at reconstructionensemble.org or by calling 212.352.3101.)