SAGA plays at the Baruch Performing Arts Center, 55 Lexington Avenue, 25th Street entrance, through April 14th. Performances are Wednesday - Saturday at 8pm and Sunday at 2pm and 7pm. Tickets are $35 for general admission, $30 for students and seniors, and are available at wakkawakka.org or by calling 866.811.4111. 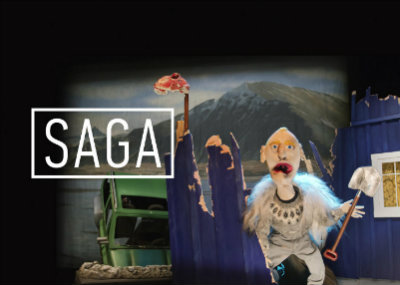 BOTTOM LINE: A contemporary, relevant story told by skillful International puppeteers who pull out every trick in the book.

Gunnar is a man on the verge. Set during the recent Icelandic economic crisis, Gunnar and his wife and son have big dreams of creating a destination where guests can ride horses, watch the Northern Lights from a peaceful Jacuzzi, and enjoy the natural beauty that is Iceland. However, when the bills begin to pile up and the bank comes after their home, the family begins to fall apart. Left alone to face the wolves, Gunnar becomes a man with nothing to lose, and his anger slowly gives way to violence. Oh, and he’s a puppet.

Obie Award-winning and Drama Desk-nominated Wakka Wakka Productions’ SAGA is billed as a modern Icelandic epic. With a strong connection to Icelandic history and lore, there are certainly epic thematic elements that help elevate this very contemporary story. Gunnar, in his descent, seems pulled toward the forces of rage which manifest themselves by an ever-growing (thematically and physically) Viking spirit. This Viking represents a desperate spirit of rebellion that is driven by the need for justice and blood.

Under the direction of Gwendolyn Warnock, SAGA is a performance that can be approached from a few different angles. In terms of puppetry, SAGA is a triumph of creativity, design, and execution. The international cast of puppeteers come from Iceland, Norway, Ireland, and the USA, and they tell their stories with puppets ranging from 3 inches to 10 feet tall. As it goes with skillful puppeteers at the helm, we become as invested in Gunnar and his family as we would with talented human actors, but visually, we’re treated to much more by the versatility and wonder that is created by these artists.

Written by Kirjan Waage, Gwendolyn Warnock, and the SAGA Ensemble, it’s important to look at the script not as a puppet show but as a story of human desperation and fear. From that standpoint, the play has some highs and lows. At its most poignant, SAGA is a story connected to the rich cultural landscape of Iceland. The script allows for some lovely imagery as the puppeteers, dressed as horses, reflect the spirit of freedom Gunnar yearns for and is quickly losing. The script transports you not only in landscape but into the home of a family falling apart.

However, the vast majority of the script follows a fairly predictable pattern, and one wonders if the storytellers rest too heavily on the novelty, however well-executed, of the puppetry. While the ending is fairly obvious from the start, the show is more of a portrait of a man’s fall, and while that idea is interesting, there should be something within that descent that surprises the audience. I couldn't help but ask myself how I would respond to the play had it been performed by human actors. I’m not sure it would translate.

There seems to be a trend lately to prove that puppets aren't just for kids, and the go-to method of proving that seems to be puppet sex. I think a lot of people will automatically think of a certain Tony-winning musical when they think of puppet intercourse, but SAGA takes it to a much more graphic level. In a flashback scene about Gunnar and his future wife’s first encounter, we are subjected to oral sex (complete with pubic hair spitting), a puppet penis going from flaccid to erect, and the complete puppet act. Believe me -- I’m no prude, but this gratuitous scene takes the youthful energy of a young Gunnar, something we need to see and believe so that we’re more invested in his breakdown, and turns it into a spectacle that not only feels forced, it hinders the story.

But the talent of these artists can’t be denied. The puppeteers of Wakka Wakka have crafted characters whose entire existences are at stake, and they’ve created a transforming, magical playground in which the characters can share their world with us. While you may not encounter a deeper human understanding, you will, at the very least, see an amazing puppet performance.

(SAGA plays at the Baruch Performing Arts Center, 55 Lexington Avenue, 25th Street entrance, through April 14, 2013. Performances are Wednesdays through Saturdays at 8PM and Sundays at 2PM and 7PM. Tickets are $35 for general admission, $30 for students and seniors, and are available at wakkawakka.org or by calling 866.811.4111.)