Off Off Broadway, Play
Extended through 10.7.13
Flea Theatre, 41 White Street 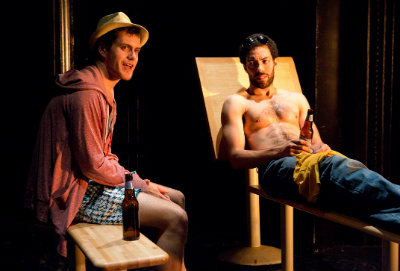 Off off Broadway’s renowned Flea Theater sets a high bar for this year's theatre season with their opening production of The Recommendation, a wonderful new play by Jonathan Caren (The Morning the Sun Fell) which premiered at the Old Globe in San Diego. The Recommendation is brought to the stage by frequent new work director and previous Caren collaborator Kel Haney (The Shakes: Romeo and Juliet) and features members of the Flea’s indefatigable young acting company The Bats.

Iskinder “Izzie” Iudoku (James Fouhey) and Aaron Feldman (Austin Trow) have been best friends since their days rooming together in college. From an affluent family, Aaron has always had it all, but he gladly shares his advantages with Izzie, an immigrant's son. Each boy seems to have what the other lacks, but this balance is thrown off when as adults they cross paths with Dwight Barnes (Barron B. Bass), a small-time criminal whom they both promise to help. The unspoken competition and assumed hierarchy in Adam and Izzie’s relationship are pulled to the surface and threaten to expose both men’s darker sides.

This play creates a true journey. Some scripts you know where you're going, you can see the milestones along the way and you watch the case being built, but Caren’s play probes. The Recommendation delves into complex issues including the nature of human relationships and what people owe one another. Through Aaron and Izzie, Caren fleshes out the inherent resentments, familiarity, generosity, underestimation, loyalty and inevitability within a friendship. It is particularly visceral not only because of the rich writing and earnest performances, but because The Recommendation presents evidence and leaves the audience to engage and form their own opinion. It’s a remarkable piece flawlessly done.

Kel Haney smoothly navigates the slipperiness of time and place within the script with subtle staging and clever collaboration between Nick Solyom’s lights, simple costume distinctions by designer Sydney Maresca, endlessly inventive but minimal set pieces by Caite Hevner Kemp, and of course the verve and specificity of the actors.

In true tradition of the Bats, all three actors bring honestly, variety, and enthusiasm for their craft. Austin Trow is charming and vibrant as smooth sailing but shallow Aaron, James Fouhey brings sympathy and spark to the climbing Izzie, and Barron B. Bass plays both the mad energy and centered assurance of convict Dwight Barnes with equal authenticity.

The Recommendation is a lovely play perfectly brought to life by the director, designers and performers. It is a visceral, intelligent, and unique script, and this production proves another feather for the Flea’s cap of fabulous shows.