Off Off Broadway, Play
Runs through 8.17.13
The Municipal Parking Lot at Ludlow and Broome 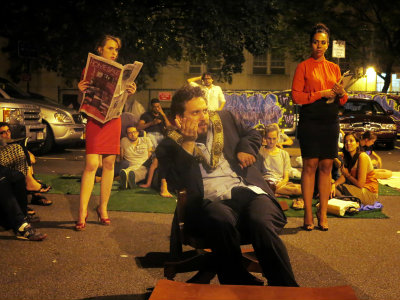 Let’s firstly point out the fact that earlier this year the real King Richard III’s bones were found in a parking lot in Leicester, England. It was an undeniable inspiration for artistic director Hamilton Clancy and The Drilling Company to present Shakespeare’s tragedy of the corrupt king as part of their annual Shakespeare in the Parking Lot series. While historians are shifting to believe that Richard has been given a bad rap by his Tudor successors and may have actually been a “man for the people,” in Shakespeare’s realm Richard will forever be memorialized as crooked and vengeful. In this production, directed effectively by Clancy (who has also stepped into playing Hastings unexpectedly), Richard is just that in a deliciously volatile performance by Alessandro Colla. The slimy characterization by Colla is only upstaged by the streets of New York.

While some theatergoers may have years of experience attending Shakespeare in the Parking Lot, this was my first. Therefore, my experience was as much about the locale as it was the play. Clancy has expressed that his goals for the unique civic location is to draw in unwary audience members. I observed this constantly on the evening I attended. People would be walking to their cars in the parking lot and were surprised by the appearance of a thrust-like stage with over 100 audience members taking up the space of 8 parking spots (The Drilling Company recently struck a deal where they pay for these spots in exchange for the public performance space). One Shakespeare-savvy gentleman was elated after quickly realizing the play was Richard III. He stood with his friends excitedly watching the event for nearly 20 minutes before finally continuing onto his car and leaving the lot.

An “event” is exactly what is happening here along with a play. There were nearly as many moments, if not more, where my attention was diverted away from the play and to a character or two in the parking lot. Even as a responsible theater reviewer, I could not help but follow the drama unfolding as two young men engaged in a fist fight which was quickly broken up. Another man stumbled upon the play very confused and began shouting back at the actors. He eventually made his way onto the stage before realizing this was inappropriate and wandering off. These were the larger events that occurred, but nearly every minute there was something to draw attention from Colla’s smoldering Richard onstage.

If you arrive early enough, you might get a seat right next to the action of the play in which case you may fare better at being focused on the dramatic plot. Either way, the experience is successful and completely in the vein of Elizabethan theatre where the streets found their way into the Globe daily. There is no neat separation of classes made by the purchase of a ticket.

As for the production: Colla does excellent work at capturing both the torment and the knowing deceit of Richard. In Clancy’s production, Richard doesn’t get off the hook too easily with much empathy. He is a disgraced politician who is willing to do whatever it takes to rise to the top in spite of everyone in his path. The allegory to American politics is made clear by the large American flag stretched as the backdrop in the parking lot.

Some of the actors in the production are able to be heard loudly and stay fully committed to their characters despite car horns, shouting and the pausing of the performance to make way for departing vehicles. Most notable is a fiery performance by Sheri Graubert as Queen Margaret. The play drops a little in intensity when neither she nor Colla are onstage. However, this has as much to do with actors getting occasionally distracted or not having a booming voice to rise over the sounds of a night on the Lower East Side. Shane Mitchell as Richmond brings the play roaring back to life with his impeccable delivery toward the end, perfectly cast as a foil to Colla’s raspy Richard.

The experience on a whole is unforgettable. Clancy’s staging uses the parking lot expertly. He never worries about masking entrances, exits or the backstage. There is a sports arena atmosphere to the space as the actors wait idly to jump into the game. Nevertheless, Shakespeare is only part of the enjoyment in this evening of attention pulling moments -- sometimes on stage and sometimes off. As the sun goes down, the ConEd lights strike up and the yellow glow of the parking lot takes on a new aura of electricity. The play’s the thing; except when it’s not -- that’s when you have real world characters to entertain you as well.

(Richard III plays at Shakespeare in the Parking Lot at The Municipal Parking Lot at Ludlow and Broome Streets, through August 17, 2013. Performances are Thursday, Friday and Saturday at 8pm. Tickets are FREE. More information is available at shakespeareintheparkinglot.com or by calling 212.873.9050.)