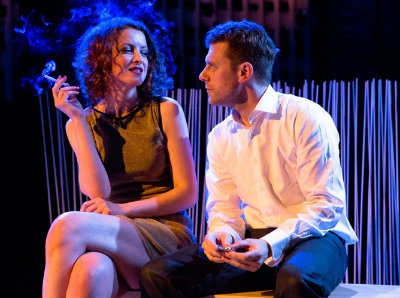 BOTTOM LINE: This dark comedy about greed and desperation hits many familiar notes, but its international setting and brisk pace make it a satisfying experience.

When I received the invitation to review a new work by a playwright from Serbia, I asked a friend whose husband was born and raised there to join me. Throughout the performance, I heard her chuckling. “I guess that struck a chord with you, huh?” I asked her as the lights came up. “Yeah, a lot of chords,” she replied.

Written by Jelena Kagjo, whose work has been produced throughout Europe, Realists takes place in modern-day Belgrade, Serbia's capital city. It follows a group of upwardly mobile thirtysomethings, obsessed with career, money, and the trappings of success. Act I takes place in an office, where a psychotherapist counsels one patient who flatly denies there’s anything wrong (despite having had a stress-related seizure at work) and another who wallows in her anxiety and depression. Of course, the therapist has his own problems. In Act II, two old “friends” and their respective husbands meet for dinner in a glamorous apartment where the wine flows freely and everybody gets very friendly indeed.

The fresh twist on this familiar scenario -- people whose relationships are defined, and undermined, by materialism and competitiveness -- is the play’s setting. The recent history of the Balkan peninsula (collapse of communism, civil war, ethnic strife) hangs heavily over all the characters. Gregor (Kevin Hogan), the middle-aged therapist, blames globalization for his young patients’ money mania and bemoans the loss of their country’s traditional culture. Pedrag (Sean Meehan), his most recalcitrant client, is a sleep-deprived workaholic who sneers at the older generation and yearns to emigrate to the U.S., which he calls “the Promised Land.”

Among the accomplished cast, the women in particular stand out. In Act I, Samantha Soule is a walking nervous wreck as Sonja, an out-of-work claustrophobic who tries to tempt Gregor into an unethical relationship; Act II sees Jelena Stupljanin giving a master class on comic acting as Gordana, a high-powered businesswoman who “has it all” -- husband, kid, elegant home -- but keeps a gun in her bedside table just in case she ever decides to act on her urges to kill her successful, opportunistic spouse, Ratko (Uliks Fehmiu, somewhat miscast). Perhaps not coincidentally, Stupljanin also contributed to the script’s English-language adaptation, along with director Ian Morgan (Associate Artistic Director at The New Group).

Thanks to Morgan’s disciplined direction, and enhanced by Stephen Dobay’s elegant set design, Realists’ two short acts power through a range of plot twists -- bribery, blackmail, adultery, revenge -- at just the right pace. The characters are hardly deep, and the narrative doesn’t reinvent the wheel, but as a comic take on a very serious cultural crisis, Kajgo’s play piques our interest and delivers laughs (and more than a few grimaces). It’s a well-made dramedy with a Slavic accent.