The Picture of Dorian Gray

By Oscar Wilde; Adapted and Directed by Glory Kadigan
Produced by MTWorks 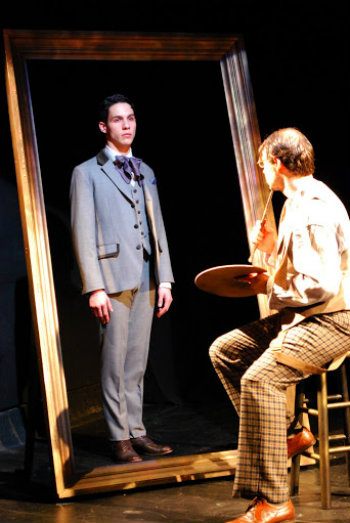 Francesco Andolfi and Eric Percival in THE PICTURE OF DORIAN GRAY. Photo by Antonio Minino.

BOTTOM LINE: An entertaining representation of Oscar Wilde’s novel, which does a decent job of bringing to life a challenging story.

I think it’s only right that I start this review with a disclosure: I. Love. Oscar Wilde. I would literally watch any adaptation of his works, even if it were a postmodern musical representation done with velvet hand puppets. So I latched on to the chance to see Glory Kadigan’s theatrical rendering of one of my favorite novels, The Picture of Dorian Gray. I was particularly intrigued to see this, as having read the book, I could only imagine the immense challenge it must be to bring this story to the stage.

Dorian Gray (Francesco Andolfi), a young and handsome aristocrat, breaks into the London social scene after having his portrait painted by his friend and artist Basil Hallward (Eric Percival). The portrait is a staunch reminder of the beauty, innocence and youth possessed by Dorian -- an innocence that will be shattered under the influence of the hedonistic and playful Lord Henry Wotton. As Dorian sinks into the more narcissistic lifestyle his friend advocates, and then intro outright crime, the portrait seems to grow uglier, reflecting the soul of Dorian, while our hero stays as young and beautiful in appearance as he was the day he posed for Basil.

Now let’s be honest, any play whose script has been written by Oscar Wilde has half the battle won. Lord Henry (David Stallings), is a joy to watch and listen to; his comments are skillfully filled with the sarcasm and unrelenting wit you would expect from the character. He influences Dorian in a masterful way, presenting a lifestyle which mostly values beauty and the gratification of the senses. This contrasts with Basil, who acts more like the moral compass towards which Dorian once pointed.

Given the small size of the stage and the difficult nature of showing a portrait that changes over time, the company uses lighting and sound extremely well (credit to Christopher Weston and Jacob Subotnick). The moral demise of Dorian is represented by the characters that he harms, which take on grotesque forms and shapes through some skillful make-up, enhanced by eerie music and the sharp lighting. Also, the plot is narrated mostly by characters who are in portraits themselves, which creates a haunting effect when accompanied by the lighting.

However, I felt that the show fell short of delivering a fine enough performance to accompany the immaculate script. While Percival, as Basil, was at times convincing, his exchanges with Dorian often seemed unnatural and a little too non-chalant given the artist’s extreme sensibilities and the seriousness of some of the topics. Andolfi, as Dorian, was a little too wooden and one-dimensional, lacking the complexity of a character transitioning from virtue to the deepest forms of vice. This perhaps was due to the fact that the transition in the play was represented in an almost binary manner, the scenes before the intermission show Dorian experimenting with the indulgence of his senses, while the second half of the plays kicks straight off with some pretty explicit male nudity and rampant homoerotic orgies. This structure does not lend itself to a gradual transition in Dorian’s character. Oscar Wilde’s novel does include some homosexual overtones, which director Glory Kadigan clearly chooses to focus and expand on. The relationships between our three heroes are presented as homosexual, as are many of the interactions between Dorian and the rest of the male crew.

I did enjoy watching the play, although this may appeal more to die-hard fans of Oscar Wilde. After all, it’s not often you get the chance to see his only novel on stage.