Off Off Broadway, Play
Runs through 7.26.13
The Brick Theater, 579 Metropolitan Avenue 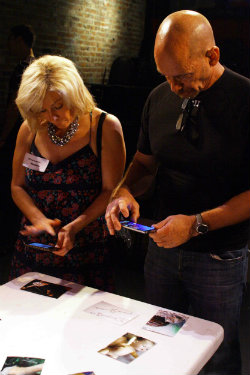 Part of the award-winning Brick Theater’s Game Play Festival, The Photo Album invites the audience to actively participate in uncovering the stories behind a collection of photographs. MC (Alden LaPaglia) loved her Victorian in the diverse Ditmas Park neighborhood, but since she found a stash of photos from previous tenants, the mystery of who they were and what secrets they kept has been keeping her up nights. Maybe if the audience helps her uncover these stories, she will get a good night’s sleep again?

Upon entering the space, the audience is encouraged to download a free Layar app to their smart phones or tablets. The MC’s photos are spread on a table in the center of the room. When scanned with the Layar app, each photo gives two clues: an item of clothing and a prompt. When the actor wearing that accessory is given the appropriate prompt by an audience member, he or she begins a story or game. The actors meander all over the building including the lobby and backstage, undermining the spatial definitions of “theatre” and further emphasizing the interactive, experiential nature of the piece.

With eleven characters who each have more than one story, and only 45 minutes to collect them all, it’s impossible to hear every part of The Photo Album, but gosh you want to try! Never in a theatre have I seen an audience so universally engaged or so uniformly disappointed for the piece to end. It’s so much fun to collect these fascinating tidbits, and the cast are all so welcoming and talented, I wouldn’t be surprised to learn that many patrons go back more than once to play again.

The actors in this ensemble have the unique challenge of creating a character and living in it for forty-five minutes while delivering set speeches and also improvising between recitations with audience members and one another. This cast meets the trial with panache, adding to the playful spirit of the event, clearly well prepared by director Lisa Reinke. As director, producer, and co-author, Reinke’s skillful guidance of this piece evinces itself throughout, in the cohesion of the cast, the uniformity of tone and energy in the space, and the seamless incorporation of audience and technology into the live event.

The Photo Album is an ambitious, thoughtful, polished theatrical event. Featuring a cast of charismatic actors performing collected works by clever writers in a spirit of sharing and discourse, frankly The Photo Album is fun and cool and everyone should go.

(The Photo Album plays at The Brick Theater in Brooklyn, 579 Metropolitan Avenue at Lorimer, through July 26th. Remaining performances are Tuesday, July 16 at 8 PM and Friday, July 26 at 7 PM. Tickets are $15 and are available at www.bricktheater.org or by calling 866-811-4111.)