Written and Directed by Ian W. Hill
Produced by Gemini Collisionworks and The Brick Theater

Off Off Broadway, New Play
Runs through 11.23.13
The Brick, 579 Metropolitan Avenue, Brooklyn 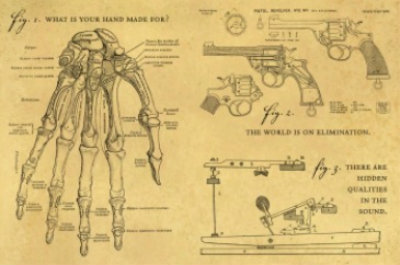 BOTTOM LINE: A beautiful, weird work of theater brought to you by one of the hardest working playmakers in show business.

Before I delve into this review, I have a confession to make. Purchase is part of Gemini Collisionworks, a month-long festival of plays written, directed, designed and produced by Ian W. Hill and Berit Johnson. It currently plays in repertory with Hill and Johnson’s The Strategist, in which I appear. I was glad to accept this assignment for Theatre Is Easy but not without reservations. How much personal bias would I allow to seep into this review? Would I waste too much creative energy trying to appease my benevolent theatrical overlords? Would I take up too much of my word count trying to plug The Strategist (running now through November 23rd)? These thoughts plagued me this past Saturday at The Brick Theater.

Well, Purchase won me over almost immediately with its intense saturations of colors, haunting musical landscape and dreamlike hallucinatory weirdness. I lost myself in the world of the show and in the strong performances of its two leads (Alyssa Simon and Anna Stefanic). What a relief to know that I could review Purchase favorably. In fact, as I sat down to write, I realized how my position gave me an unique opportunity to explore this show in a way that someone outside of Collisionworks could not enjoy.

I mentioned before The Strategist (running now through November 23rd), so I will start by telling you about that show. The Strategist is a witty three-act farce based in the style and structure of English Restoration comedy but set in contemporary Williamsburg. Co-authored by Hill and Johnson, it is a goofy but intelligent show that has fun poking at the hubris and obsessions of the leisure class. It balances a diverse cast of eighteen players in a series of ridiculous overlapping conflicts like a juggler on crack.  Hill and Johnson put a lot of affection into the process of making The Strategist and it was fascinating and fun being a part of it.

What is remarkable about Purchase, The Strategist’s sister play, is how it could not be any more different. While The Strategist is light and breezy, Purchase is dark and wrenching. The Strategist is carried on the backs of a veritable army of actors, while the weight of Purchase rests on the shoulders of two performers. The Strategist finds delight in format and expectation while Purchase does everything it can to screw with convention. Both plays have very different endgames in mind and both succeed on their own merits.

Purchase unfolds in a United States several decades and revolutions removed from our time. In the course of the play, Lady Stefanie Anderssen (Simon) a former pianist and outspoken leftist is confronted by Colonel Simonette Allyson (Stefanic) a seeming pawn of the government with aspirations of her own. The older Stefanie speaks in relaxed American cadences while the younger, militaristic Simonette converses in jagged, deconstructed sentences. Simonette’s speech patterns are jarring to our ears, but we are led to believe that they are the norm in this brave new world. Stefanie evokes the country and culture we are comfortable with. Simonette represents America’s frightening, unknown future.

Both women have enough in common that they form a tenuous connection (Simonette nurses a forbidden love of music) but their ideals and goals make one a threat to the other. We get the sense through the course of the play that in another time, another climate, Stefanie could have been a friend or a teacher to Simonette -- the women could even be two versions of the same person -- but their current reality makes such a relationship impossible.

Hill tells the story of Purchase in a non-linear, dreamlike fashion. As a playwright and director Hill is bold with his choices and confident in his experimentations. He washes the stage in damp, rich color and chooses an obscure, eclectic mix of music to underscore his prose.  On The Brick website, Hill lists his influences for Purchase as Genet’s The Maids, Bergman’s Persona, and Fassbinder’s The Bitter Tears of Petra von Kant and the spirit of expressionism from those sources are used to strong effect.

The two actresses in the eye of Purchase’s storm are up to the challenges set by Hill. It is always a pleasure to see Alyssa Simon in anything; she brings a rich inner life to everything I have seen her in. Her Lady Stefanie is equal measures aristocratic and earthy, mellifluous and blunt. Her performance gives Purchase its emotional anchor.

Stefanic is equally effective in the challenging role of Colonel Simonette. She invests Simonette with a yearning vulnerability that softens her harsher edges. The highlight of Stefanic’s performance comes midway through the show as she entertains Stefanie with an impromptu Debussy performance. As Stefanic’s fingers fly across the keys (she plays brilliantly) we learn everything we need to know about Simonette: everything she could have been and everything she will never be. It is a subtle moment of catharsis for the character that Stefanic brings to beautiful life.

I was very moved by the dark beauty of Purchase, and I know based on my experience in The Strategist just how much hard work and love went into its conception. I did not intend this review to become a love letter to Collisionworks, but here we are. The plays of Ian W. Hill and Berit Johnson are not made with idle hands. Hill and Johnson’s hard work and commitment to their vision has made the theatrical landscape of New York a lovelier, weirder and more interesting place. I feel honored to have witnessed it and to have been a part of it.

(Purchase plays at The Brick Theater, 579 Metropolitan Avenue, between Union Avenue and Lorimer Street, Williamsburg, Brooklyn, through November 23, 2013. Performances run in repertory with The Strategist. Tickets are $18 and are available at the door or at www.bricktheater.com.)