By Bernard Kops; Directed by Kelly Morgan
Produced by Theater for the New City

Off Off Broadway, New Play
Extended through 10.13.13
Theater For The New City, 155 First Avenue 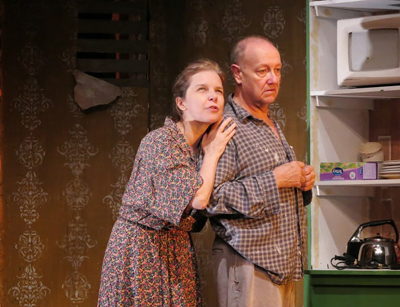 BOTTOM LINE: Family dysfunction is writ large in this domestic drama about Norman and Sandra Lewis, a middle-aged brother and sister who have never lived apart.

Playing Sinatra opens on a gone-to-seed domestic tableau. The wallpaper is torn and peeling, the couch is stained, and there are small piles of detritus on the floor. But it is home, and when Sandra (played with childlike naiveté by the terrific Katherine Cullison) returns from a long day of work in her dreary London office she seems overjoyed that dinner has been prepared and Norman (the excellent Richard McElvain, simultaneously displaying affection and thinly-veiled rage) is there to greet her. At first, the dyad suggests a long-married couple, but it quickly becomes apparent that Sandra and Norman are siblings. An aura of creepiness is immediately evoked — and is then sustained for the entire production.

As the story unfolds, we learn that Norman is a retired bookbinder, a task he likens to creating an “external skeleton, without which everything would fall apart.” Now agoraphobic, he writes pithy one-word poems, manages the home, and massages his sister’s aching shoulders every evening. He also encourages her to “play Sinatra” a trivia challenge focused on minutiae about Old Blue Eyes.

Both adore the singer and as much as anything else, he provides the tie that unites them. “The joy I feel when he sings,” Sandra effuses. “All the pain of the world evaporates...Sinatra people don’t cause wars...His voice ignites such love inside me. I love everyone. Life has meaning.”

Still, despite the comfort of their routines — one gets the sense that every game and every conversation has been had innumerable times — Sandra longs for more, whether a game of bridge with neighbors or more exotic ramblings. On a particularly lovely day, she ditches work and eschews her everyday routine. What happens next — a chance meeting with a white-haired American chap who dubs himself “a seeker" — jolts her out of the rut she’s been wallowing in. It’s both charming and pathetic to see the man, named Phillip deGroot (played with false-modesty and con-man swagger by Austin Pendleton) lure Sandra with tales of spiritual encounters and personal adventures. Even better, he professes to share her love of Frankie S. It’s a dream come true for Sandra, and when Phillip confides that he has “a modest income, a legacy,” but is still searching for his “true vocation,” she doesn’t bat an eye or look askance. Instead, she allows herself to fantasize about a life far away from Norman and everything she has ever known.

And herein lies the problem with Playing Sinatra. “I vowed to look after you,” she tells her brother. “I promised daddy.” The question is why. While both Norman and Sandra are tied to the past — both continue to mourn their parents and spend hours staring at family pictures and mementos — the audience never learns the Lewis children’s backstory. Questions abound: Were they victimized by physical, sexual, or psychological abuse? Why is Norman afraid to leave the house? What, exactly, does Sandra mean when she tells Phillip that Norman has “murderous tantrums?” Is Sandra really so trusting and innocent, or is this a protective ruse? Bernard Kops' script offers no clues, but it is obvious that Norman and Sandra are painfully damaged. What’s more, the play’s allusions to past atrocities tease rather than enlighten, making Playing Sinatra both frustrating and enigmatic.

That said, Playing Sinatra’s denouement is a surprise. Indeed, despite Norman’s protestation that “we are who we are. There are no escapes,” the play’s conclusion ultimately makes this questionable. Perhaps novelist Tom Robbins was right when he wrote that “it’s never too late to have a happy childhood.” With Sinatra as soundtrack, Norman and Sandra — along with their new friend Phillip — can certainly try to start anew.

(Playing Sinatra plays at Theater For The New City, 155 First Avenue, through October 13, 2013. Performances are Wednesdays through Saturdays at 8PM and Sundays at 3PM. Tickets are $15 and are available at theaterforthenewcity.net or by calling 212-254-1109.)