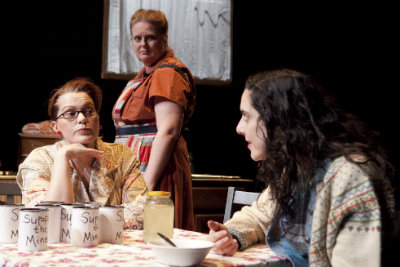 BOTTOM LINE: An exciting and meticulously-structured new work about Welsh mining strikes, told by a playwright worth watching.

During the UK miners' strike of the mid '80s, the citizens of one small Welsh town are more like family than neighbors. They’ve spent their entire lives together, and they’ve shared happiness and, especially lately, heartache. Spending their days picketing the scabs who’ve taken their place and raising money for their cause, protesting has become their existence, and it’s impossible for that much rage to not sink in.

In her new play Pit, presented by Long View Theatre Company, emerging playwright Melisa Annis doesn’t give her characters a break. On top of the strike that carries with it already life or death stakes, Annis deftly elevates her work above a social issues play, instead exploring the enduring humanity of her characters and exploiting every sliver of hope that comes bursting through the cracks. The strike may be an ever-present hurdle, but these people are dealing with their own changing viewpoints, troubled relationships, and the bigger question of what responsibility actually means.

The women of Pit are the main focus of the play. Val (Samantha Jones), whose husband George (Patrick Eichner) is a local labor leader, has managed the family finances for years. Seeing no other options and expecting the strike to end soon, Val has mortgaged the home, and now the bank is threatening to take it. Val must now decide whether to search for a new solution or turn to her husband, who is already plagued by both the strike and his failing health. While her husband has been traveling the countryside advocating miner’s rights, Catrin has been collecting money for the cause at Cardiff Unviersity, where a young, idealistic Communist has drawn her attention. Catrin (Sarah Matteucci) now must decide if this new man represents a new way for the miners or a new journey for herself. At each turn, these women find themselves torn between their duties to their husbands, the cause, and themselves.

Under the direction of Jeff Woodbridge, the cast possesses a palpable love for the material they’ve been given. Seeing it in its final weekend, Pit certainly did feel a bit tired, and there were some moments that felt more like the director’s hand than organic character work. But the cast gives their all, and some really elegant performances emerge.

Samantha Jones is the undeniable anchor of this cast. As Val, Jones is a maternal force in the town, and her passion for the cause is almost religious. Jones doesn’t allow her character to be a result of the strife; she instead tirelessly rises above the heartache. Whether making sandwiches, working the picket line, or doing anything in her power to keep her husband fed, Jones could have easily portrayed a victim. She instead exposes a champion. As her husband, Patrick Eichner matches Jones’s fervor with an introspective rage and understated sense of true sacrifice.

Sarah Matteucci gives her Catrin an open-mindedness that comes from a need to solve an unsolvable problem. Matteucci is at once a child dreaming and a woman surviving, and she balances the two beautifully. And though Annis spends a bit too much time with Catrin’s “will she or won’t she” love triangle, Catrin becomes a new woman, fueled by the idea that new ideas, however radical, might also mean a new spark between two lovers.

Jake Levitt’s performance is perhaps the most surprising and refreshing of the evening. Levitt portrays Huw, the son of a local pub owner who, unlike the other men his age, has never entered the “pits”. Instead, he sports a mohawk, smokes pot, and generally doesn’t care for much until his father, suffering black lung, has been taken ill. Levitt possesses an understated, thoughtful line delivery that really allows this production -- often filled with aggressive conflict -- to breathe. Levitt keeps a great control over his physical and vocal presence in the production, and he provides a lovely, comedic contrast to the characters around him.

Though I think the argument could be made that Annis has crafted a “well-made play” that doesn’t take an excessive amount of risks, the subject matter alone is daring and shows her passion as an artist. Structured to near-perfection, Pit is a refreshing script to see from a new playwright who embraces the craft of playwriting and delivers a story that both plants itself firmly on stage and opens up a dialogue of the larger issues explored.