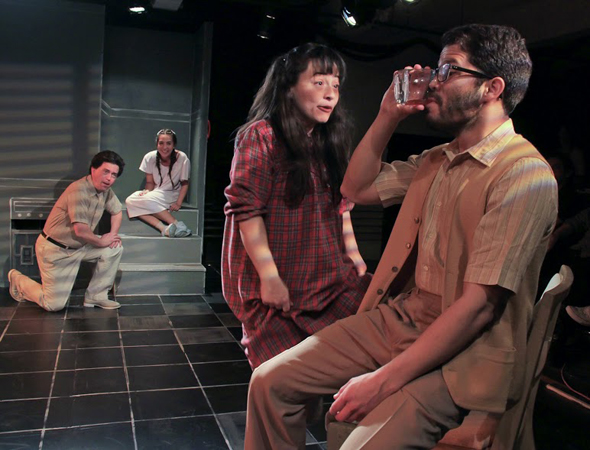 Produced as part of Lark Play Development Center’s Launching New Plays into the Repertoire initiative, Andrea Thome’s Pinkolandia tells the story of a family of four who’ve made the move from a perilous Chile to a seemingly safer Wisconsin in the 1980s. The family’s two young daughters possess zero to minimal rationale as to why they must begin a new life in America. Twelve year-old Beny (the adult actress Maria Helan) does, however, remember a few things from growing up in Chile and is on a constant hunt for truth from the adults who surround her.

This play works on so many levels that it took me quite off-guard as a theatrical experience. It’s a perceptive family drama that wisely comments on the lies adults tell kids to protect them...even when the kids don’t want protecting. In a striking, understated performance, Annie Henk portrays Mom as a stern authority figure who holds much emotional baggage deep, deep within. Thome, clearly one of the smartest writers in town, makes us wait over two hours for Mom to let her guard down. Alas, when she finally does, it is one of the most touching moments of the play.

Pinkolandia also works as an eye-opening conversation starter regarding the events occurring outside one’s own bubble. The lead characters here may be nine and twelve, but Thome and the ingenious director José Zayas refuse to make them naïve caricatures. A school presentation sequence in which Beny challenges her classmates and the audience “do you know what’s going on outside this room? Outside this country?” is effective dark comedy, especially following a moment in which Beny’s peers call her a terrorist, barely knowing a thing about her besides what she looks like.

The play works as a coming-of-age journey between two drastically different sisters. The younger Gaby (Heather Velazquez) hides in a closet, utilizing the fierce power of her imagination to whisk her away from a harsh reality. Meanwhile, Beny so badly wants to handle a harsh reality that she’s willing to force Gaby to admit that her beloved Closetland isn’t real. It’s painful to observe, especially if you have an older sibling that you trust and admire to the extreme.

The performances are polished and nuanced all around. José Antonio Melián is alluring and mysterious as visiting uncle Ignatio. As Dad, Carlo Albán is the perfect counterpart to Henk. It’s a gentle, touching turn which admirably exhibits the reasons his daughters respect their father but can also playfully laugh at his drunken dancing. Helan nails ‘rebellious twelve-year-old,’ while Velazquez -- though one-note -- hits the right note. Both are equally believable playing children, quite a feat. And days later, I’m still thinking about Annie Henk’s rendering of Mom. This is an actress who knows how to hold back, speak with her eyes, and slowly show her cards as opposed to showing them all at once.

The set design by Raul Abrego features constantly transforming walls and a mix of real structures (a kitchen counter) and chalked-in designs (the inside of a closet). The way it combines an adult and childlike aesthetic is wildly inventive. Jane Shaw, Alex Koch and Edgardo Miranda-Rodriguez deserve praise for equally impressive sound, video, projection, graphic and poster designs.

Minus a few false endings during the end of Act One and some dialogue that registered as too adult sounding for the young Beny to recite, I was invested in Pinkolandia from start to finish..and this was a two hour 15 minute endeavor. The folks at Intar have made Pinkolandia a provocative, meaningful place to visit. A Theasy Best Best Conversation Starter? Hands down.

(Pinkolandia plays at INTAR Theatre 500 West 52nd Street at 10th Avenue, through May 26, 2013. Performances are Wednesdays through Saturdays at 8PM and Sundays at 5PM. Tickets are $35 and are available at ovationtix.com. There are special $5 Wednesday tickets available at intartheatre.org.)