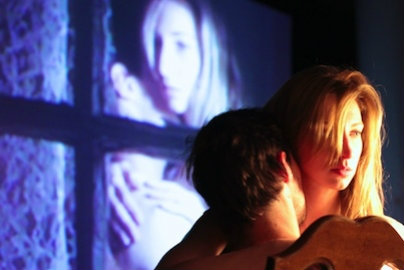 Robert Kitchens and Amanda Dieli in THE ORPHEUS VARIATIONS.

BOTTOM LINE: Regardless of whether it is theatre or film, The Orpheus Variations is one of the most intoxicating performance experiences in recent memory.

Don’t call it theatre. Don’t call it film. Call it an experience, and whatever you do, just go! The myth of Orpheus and Eurydice is a story that has perpetuated throughout time and has been seen in many theatrical versions. However, the truncated adaptation by The Deconstructive Theatre Project, The Orpheus Variations, riffs on this classic tale with the purpose of exploring memory, and how it functions when experiencing a significant loss. In the talkback following last night’s opening performance, the director/artistic director/brainchild/wunderkind Adam J. Thompson explained in laymen’s terms that when the mind remembers something, the same part of the brain “lights up” as when one is imagining something. Therefore, our memories operate in many ways like a film. Mr. Thompson does not profess to be an expert on the subject, he is merely a curious theatre-maker who has done his research. However for any doubters out there, a works cited list can be found in the program; or even better, take a moment to remember something that happened to you last night, or many years ago---pretty cinematic right?

This idea of memory that is being explored by DTP, takes shape in a performance that blends together two mediums: theatre and film. A smattering of props, instruments, cameras, and fragmented set pieces occupy the stage with a projection screen looming behind. As the audience filters in, the ensembles meanders around the space checking their equipment. Once the house lights go down, a man picks up two clay discs and rubs them together in a circular motion, creating a sound like metal wheels picking up speed on a train track. The image of rocking luggage then fills the screen, and we are transported. The memories or Orpheus and Eurydice (told with a distinctly contemporary spin) fill the screen for the next fifty minutes, while the ensemble works seamlessly on the ground to film this story. As the audience, we witness two experiences occurring simultaneously: the making of the film, and the film itself. In many ways DTP’s piece is reminiscent of a radio play with the cast/crew telling the story while generating the sound effects concurrently. The result being one of the most evocative, stimulating, and astonishing experiences to occupy a theatre in quite a while.

Thompson gives his audience choice by allowing us to focus on the various elements at play. While one may instinctively pay closer attention to the film being projected, there are guaranteed to be moments when the eye wanders to the ensemble setting up for the next scene (a fascinating process), or the principal lovers interacting when they are off-screen (a particularly beautiful throughline). In an age where theatre is constantly trying to reinvent itself and distinguish itself from film, the Deconstructive Theatre Project takes the opposite approach and creates a hybrid experience that never sacrifices the magic of the movies, the rush of live theatre, or the cathartic experience of clear and simple storytelling. In a city as vast as New York, where entertainment choices are in no short supply, the decision making can be the most difficult part. During the short run of The Orpheus Variations there should be no other choice and no other ticket to buy; for no other experience will compare, or be as memorable.