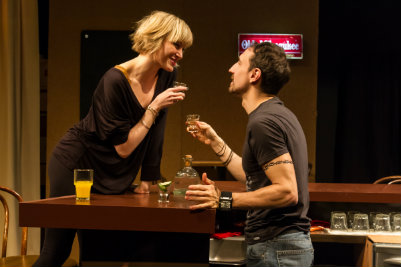 BOTTOM LINE: Actress Susannah Hoffman makes this play a success, putting her spark of life into a story about every-day characters who want to own their own bar.

A girl walks into a bar and sees the cute bartender sulking near the register...Wait a second, hold up! I’ve heard this story before! Luckily, in Owned, playwright Julian Sheppard adds enough twists to hold our attention with such a common theme.

Owned follows Ed (Don DiPaolo) and Ray (Neil Holland) on their journey as bartenders trying to buy the bar they work at. This involves everything from convincing their boss to sell to them, getting a loan, and simply having the nerve to go after their dreams. We learn this bar is what keeps them going as they deal with each other’s foibles, of which they both possess many. At times the night I saw the show the banter lagged between DiPaolo and Holland, yet as the play progressed they settled in to their characters quite nicely and earned my investment in their characters’ futures. What really hooked me though was Morgan (played by the adorable Susannah Hoffman), with compelling wide eyes and a furrowed brow. Hoffman is the life that keeps the play ticking and her character is the mischief that keeps the plot thickening.

As Morgan interacts with the responsible yet unassuming Ed, as well as the smooth-talking dolt Ray, she adds a cornucopia of problems to their lives. Initially she attracts their attention with her looks as a “top 10 across the board,” but keeps it when they realize they can hook up with a girl “wearing the uniform” (yoga pants and uggs).

A novel idea with Owned is how the set has the audience observing the scenes from the bartenders' point of view. The entire back of the bar is exposed to us with dishwasher, trash can, and everything else the audience does not normally get to see at a bar. That includes the refreshing ability to observe the actors’ entire bodies, rather than just waist up. Director Sam Helfrich and scenic designer Blanca Añón clearly communicated well during their collaboration on this production.

One aspect of note is the adult themes represented in this show. There is profanity, sexual suggestion, vulgar slang terms, and many other items that I thoroughly enjoyed, yet might not be words and ideas to expose to young ones. So if you have kids, make sure that you leave them at home.

On the set is a chalkboard with a list of drink specials for each day of the week. You'll be glad to know that you need not partake of Sunday's "beer blast" to thoroughly enjoy yourself at this show.

(Owned plays at TBG Theatre, 312 West 36th Street, through May 11, 2013. Performances are Mondays through Saturdays at 8PM. Tickets are $18 and are available at smartix.com. For more show info visit knifeedgeproductions.com.)