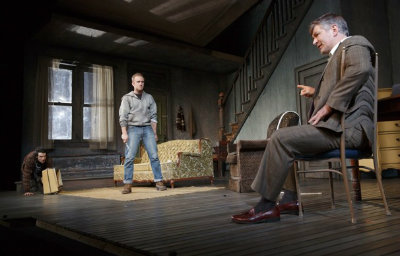 BOTTOM LINE: This drama about two brothers and the father figure they never had features a powerhouse trio of performers all living up to, and exceeding, expectations.

Lyle Kessler’s play Orphans has a tight script, an original story, and a hearty balance of comedic and dramatic moments that balance well to form an engaging tale. But really the most profound asset Orphans brings to the stage is the chance for three actors to inhabit characters brimming with strong emotion and intensity. Alec Baldwin, Ben Foster, and Tom Sturridge rise to the challenge and drive home performances that leave you in awe of the sheer talent and hard work these performers bring to the piece.

Phillip (Tom Sturridge) and Treat (Ben Foster) are orphans living in North Philadelphia during the late 20th century. Phillip has some form of autism, which forces Treat to become both caretaker and provider for his brother. He does this by stealing. We learn early on that he isn't beyond using violence to get what he wants, as he details a mugging in which he is kicked in the shin repeatedly until he knifes the man he is robbing and leaves him bleeding in the street. Phillip's innocence to his brother’s ferocity makes it clear that he idolizes Treat and is positive his brother knows best.

Enter Harold (Alec Baldwin) who drunkenly stumbles home with Treat one night, claiming to be an orphan himself. After seeing that Harold's briefcase is full of valuable stocks and bonds Treat decides to hold Harold for ransom. His plans are foiled when he discovers that Harold's "friends" could care less about his being kidnapped and really just as many people care about Harold as they do about Treat and Phillip. It seems the three of them were destined to meet. As the story unfolds Harold steps in as a father figure the boys never had, giving Phillip “some encouragement” by teaching him independence and teaching Treat to think about the repercussions of what Treat thinks of as “justice.”

The dialogue is fantastic and fast. Monologues abound but they never bore or draw on needlessly. Mr. Baldwin delivers his Jack Donaghy ‘giver of wisdom/drinker of liquor’ style with enough nuances to keep clear of a direct copy of the 30 Rock character for which is he is probably most well known these days. Then you have Mr. Foster committing so truthfully to his character that in a scene in which he reenacts an aggravating occurrence on a bus he ends up passing out, but not before his face turns bright red with stress. Perhaps his part, more than the others, is the most emotionally draining of the piece. It is such a pleasure to watch an actor go for those extreme levels of emotion without fear.

Finally, Mr. Sturridge. Mr. Sturridge begins the play by jumping around from couch to chair to windowsill to stairwell like some kind of spider monkey. The energy he exudes is truly remarkable. And that is all before a single word of dialogue is spoken. Then the show really begins and the challenge of performing a believably mentally handicapped character is laid out before him. Not for a single second did I question his performance and at no moment was it either too much or too little -- he nails the part. His performance is superb!

Orphansis just the kind of play you expect it would be, in all the best ways. Fine performances, a new story, and powerful emotions make this piece worth seeing. This is the kind of show you walk away from remembering why we go to the theatre, what we seek to learn about ourselves and those around us; these three actors without a doubt believe in that and show us through their stellar work.

(Orphans plays at the Gerald Schoenfeld Theatre, 236 West 45th Street, through May 19, 2013. Performances are Tuesdays at 7pm, Wednesdays at 2pm and 8pm, Thursdays and Fridays at 8pm, Saturdays at 2pm and 8pm and Sundays at 3pm. Tickets are $67-$132 and can be purchased at telecharge.com or by calling 212-239-6200. For more show info visit orphansonbroadway.com.)