Heidi Latsky Dance, as part of the 1:5 Choreographers at Baruch College 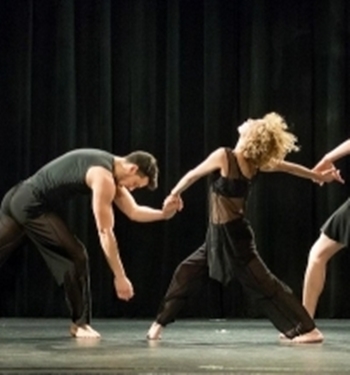 BOTTOM LINE: Incredible dancing and one of the most touching shows I've seen in a long time in a non-exploitive setting.

This Montreal-born and former Bill T Jones dancer, Heidi Latsky, has made quite a formidable mark on me. She was a part of the Baruch College’s Dance Festival 1:5 Choreographers at Baruch. Baruch College has a great black box theatre that is bringing more cutting edge work to the college and surrounding area. Her evening length work One Hour: Two Works will be part of a triptych to be premiered in 2015. The first part of the evening begins “Solo Countersolo” where Heidi herself, with a pile of blond curls on her head and the grace of a bird, sways her hips gently. The original music of Chris Brierley has a driving and minimal current and suits her movement well. Her dancers, in sleek black silk and mesh, vacillate in and out of the light with sparse movements. At first they seem to reflect the pulsing base of the music and then they overtake the stage with swinging arms like seagulls. Her solo, originally in the foreground, becomes background to the chaos which is knit together with the driving music. The sleeveless black costumes pick up just the right amount of light and the dancers scatter throughout the space and create the drips and markings of seemingly careless brushstrokes as if they were each creating their own black and white Jackson Pollack. At the end of the last few seconds, after the music died out, they used their exhales as music and accented different rhythms to different movement to create an innovative and subtle ending.

The second half of the evening was incredibly touching. “Somewhere” is set to various versions of “Over the Rainbow,” sung by Judy Garland, the Phoenix Boys Choir, Israel Kamakawiwo’ole and The Quick to list four of the ten artists. The cast members were of “mixed ability” including fully mobile bodies and dancers with cerebral palsy, Parkinson’s and hearing loss, and they danced cohesively and beautifully in a non-exploitive setting. They each had their own solo or duet to match their personality and each one brought a different quality to the song that never became tiresome. Of the fully mobile dancers, Brynt Beitman inhabited the stage like a whirling storm of precision. Meredith Fages sliced aggressively through the air and had an especially effervescent quality. As the creator of the movement, Heidi stands out, but clearly knows how to spread the dancing and focus the attention of the audience. A chair solo with Robert Simpson moving his languorous arms as if he were flying, a solo where Jerron Herman’s body shook so violently I wasn’t sure if he was human anymore, and a sensual duet with Jerron and the powerhouse Jillian where they were tracing the lines of each other’s neck were all moments that moved me to tears. I noticed the music volume going up and a club version of "Over the Rainbow" came up and two dancers took the floor. As they were incorporating sign and movement, I realized they had hearing loss, but they had an innate quality to their movement that was so original and true because this is how they communicate. It blew my mind that these courageous artists were used in ways where they were seen as artists, not a representation of someone with a disability. They made it an advantage, not a disadvantage. So often in life we cherish the “ideal” when really it is the limits that make us perceive true beauty. I hope to see the entire triptych when it’s finished in 2015.

(One Hour: Two Works played at Baruch Performing Arts Center at Baruch College on 25th Street between Lexington and 3rd Avenue, through June 29, 2013. Performances were Tuesday at 7:30PM, Wednesday at 7PM, Thursday at 7PM, Friday at 7PM and Saturday at 7PM. Tickets were $20, available at baruch.cuny.edu/bpac or by calling 646.312.5073.)


Warning: include(../../../comments/comments.php): failed to open stream: No such file or directory in /home/h6z106rzvo9t/domains/theasy.com/html/Reviews/2013/O/onehourtwoworks.php on line 151


Warning: include(): http:// wrapper is disabled in the server configuration by allow_url_include=0 in /home/h6z106rzvo9t/domains/theasy.com/html/Reviews/2013/O/onehourtwoworks.php on line 160

Warning: include(http://www.theasy.com/includes/footer.php): failed to open stream: no suitable wrapper could be found in /home/h6z106rzvo9t/domains/theasy.com/html/Reviews/2013/O/onehourtwoworks.php on line 160