On the Head of a Pin

Written and directed by Frank Winters 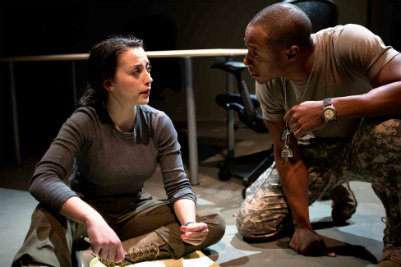 Emily Fleischer and Marcus Callender in On the Head of a Pin at 59E59 Theatres.
Photo by Hunter Canning.

BOTTOM LINE: A bold, heartfelt story of our time from an exciting new theatrical voice.

Lily Strauss is in a tough situation. Widely-known as one of the most fearless, tough-as-nails journalists in the biz, Lily has now found herself on the outs with her newspaper, the New York Guardian, after publishing a story with questionable and damaging facts. Now, at the end of her six-month probation, she’s back in the editor's office with the story of the year, but the editor she knew is fading away in a hospital, and his replacement is, to say the least, apprehensive. Meanwhile, in another place and time, Sarah Kennedy has taken a job outside of Baghdad as a translator. But when she discovers that she’s being asked to interrogate more than translate, she must decide if the money (as well as the health benefits needed for her cancer-ridden husband) is worth the fear and torture she must dole out in order to keep her job.

In On the Head of a Pin, playwright and director Frank Winters is juggling a lot. The play, which contains two plotlines and nine characters, tackles a number of big ideas such as war, torture, the first amendment, military dependence on corporations, and the obligation we have to our country, our loved ones, and ourselves. If it sounds like there’s a lot going on, there is, which would explain the nearly three-hour run time.

But if you think you’re in for a drawn-out, heavy evening of theatre, you’re going to find yourself pleasantly surprised. Winters has paced his play to near perfection; rarely do we linger longer than we have to. While the content is quite heavy, the dialogue is rarely heavy-handed. Often funny and full of heart, Winters manages to be appropriately didactic while still giving each character his due. Perhaps the highest compliment I can pay is that the run time felt appropriate, and come curtain call, I was shocked that so much time had passed.

The real success here lies in Winters’ ability to write a play not about war or Iraq or torture or politics, but about people. Almost every character has his moment in this story, and we fall in love with them for their faults, their foibles, and their hope. On the Head of a Pin is an actor’s dream piece; Winters mines each character for gold, and he almost always finds it.

The ensemble shines under Winters’ quick-pace direction. Sofia Lauwers, as Lily, somehow avoids cliché as the brash journalist. Her strength is not caricature, and we can almost see the horrors she’s seen. The same goes for Will Gallacher, who provides the punch lines and the heartbreak of a man who uses humor to mask his cynicism. Devin Dunne Cannon turns out a heartfelt and hopeful performance as the idealist intern, Gwen, and Jason Ralph brings sexy back to sleaze as evil corporate exec Chris Conrad. As the nervous new editor, James Oritz’s comedic timing is the heartbeat of the show.

But that’s the magic of this production – there is so much depth that each character transcends expectation. Whether it’s Marcus Callender’s stoicism, Emily Fleischer’s turmoil, or Jen Tullock’s terrifying strength, each actor gives us more than we could hope for. We stay on our toes watching these artists work, and the result is delightful.

Winters only misses the mark a couple of times. In a world in which the stakes are already so high, a love story emerges with stakes that seem a bit too high under the given circumstances – two lovers who have only just met but act as if they possess a love for the ages. We get a bit bogged down in their drama in the second act, and it takes away from the actual life-or-death circumstances happening around them which deserve much more focus. While we root for the two characters, it almost seems as if the love story was obligatory rather than organic.

Winters could shorten the run time by cutting the unexpected antagonist Allison Howe (a hum-drum performance by Jennifer Loring), who shows up late in the play and provides information that could easily be incorporated as exposition in a later scene.

Minor complaints aside, On the Head of a Pin is nothing if not refreshing. Somehow dodging the many traps that come with plays tackling this material, Winters emerges as a promising and intriguing theatrical voice. Keep his name on your radar.