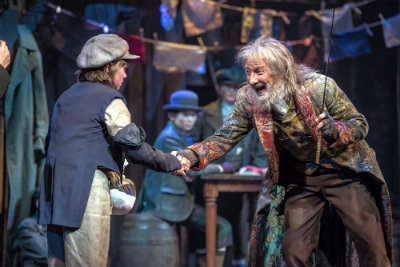 BOTTOM LINE: Is it in Jersey? Yes. Is it worth traveling to Jersey to check it out? Double yes.

Child is in a poor living situation. Child goes on a dangerous and whacky adventure. Child is lifted from poor living situation by a sweet-natured adult. This plotline can be used to describe a number of many feel-good musicals, ranging from Broadway’s recent revival of Annie to a most lively new rendering of Oliver! that opened Sunday at the dependable Paper Mill Playhouse.

Based on Charles Dickens’ novel Oliver Twist and featuring music, lyrics and a book by Lionel Bart, Oliver! sees our title hero (played by Tyler Moran) kicked out of a workhouse in 1830s London for -- you guessed it -- asking Mr. Bumble (John Treacy Egan) for “more, sir.” Cue that dangerous, whacky adventure as little Oliver heads to a funeral parlor run by Mr. Sowerberry (Michael Di Liberto, over-the-top quirky) and Mrs. Sowerberry (Dierdre Friel, a fabulous comedienne) followed by a thieves’ kitchen overseen by Fagin (David Garrison). Some of these supporting characters have no problem harming Oliver, though none are as malicious as Bill Sikes (Jose Llana) who resorts to violence to get his way (a fair amount of it, too, given this is a family show). And some of these supporting characters have Oliver’s back, though none are as benevolent as Mr. Brownlow (David Hess) who takes the young boy into his home in Act II.

Paper Mill has some phenomenal character actors at their prime, particularly Egan, who sets a high precedent for acting at the top of the show, and Garrison, who shines in “Pick a Pocket or Two.” As Nancy, Betsy Morgan emotionally renders “As Long as He Needs Me,” receiving lengthy and well-deserved applause. The choreography by Joann M. Hunter is stellar; the ensemble is particularly impressive in “Consider Yourself,” the evening’s high point.

While Tyler Moran is solid as Oliver and his singing is spot-on, at times he goes through the motions of a scene, song or dance as opposed to living in the moment. Further performances will certainly make him more confident in terms of meshing the physicality, facial expressions and vocals into a seamless performance. Meanwhile, Ethan Haberfield as the Artful Dodger, one of Fagin's minions, easily walks away with the show. This young actor is immaculately consistent, laugh-out-loud funny and wildly charming.

I do wish certain moments were milked for their comedic potential. Llana’s portrayal of Bill Sikes is sinister for sure, but the song “My Name” offers room for silliness that never arrives. And the blocking in Fagin's solo “Reviewing the Situation,” is a tad uninventive, leaving Mr. Garrison without enough to do.

Still, the spirited cast more than capably delivers the goods and the whole family can enjoy this gorgeous, professional production. The parents of the sixteen local boys that made the show from across the state of New Jersey (who auditioned from a pool of over 200) will be beyond proud. And given the time of year, that pride spreads across the whole theater. Paper Mill's Oliver! is a warm treat for the holiday season.