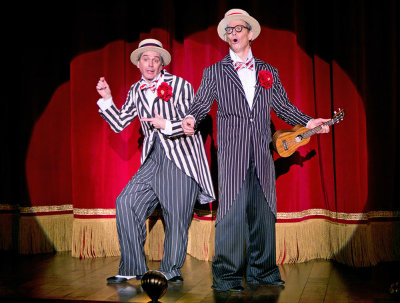 BOTTOM LINE: Some clowns never get old -- and that's good news for us.

The title says it all in Bill Irwin and David Shiner’s wonderfully charming and jaw-dropping Old Hats. Indeed, the gentlemen have been mastering the art of clowning for decades -- and they wear many hats. What is delightfully surprising is just how fresh this show feels, owing much to the quirky performance of indie-rock songstress Nellie McKay. Irwin and Shiner have used a classic setup of: a sketch, followed by a song (while a costume change occurs behind the scenes), followed by another sketch. There’s even the large Looney Tunes red velvet curtain which is almost a character unto itself. In some ways the entire concept is a big “peek-a-boo” game of funny faces that are covered up to reveal the next. And it is positively delightful. Director Tina Landau allows these two veterans to do what they do best, in such a way that feels far from dated.

There is something undeniably and universally funny about physical comedy based around a basic conflict. It also helps when you have the Dick Van Dyke-like lanky rubber bodies of Irwin and Shiner. Posted on a wonderful dramaturgical board outside the theater, Irwin and Shiner are quoted saying “One of the primary ingredients is always competition.” In the case of Old Hats, that competition ranges from classic vaudeville-style spotlight-hogging to a satiric political debate (complete with huge shiny horse teeth).

When Irwin and Shiner tire of competing with each other they turn to the audience for conflict. In one of the more side-splitting displays of audience interaction to date, Shiner brings up a handpicked cast of audience “volunteers” (although if you raise your hand you probably won’t be chosen) to take on the roles in a classic silent western saloon shootout scene. While the participants may vary night to night -- the evening I attended included a loveable but daft gentleman cast as the film director who struggled with the concept of a clapboard -- it’s Shiner’s lighting quick reactions to anything thrown at him that brings true virtuosity to the scene. Reliably on any night there are certain unavoidable set-ups in the bit that would turn John Wayne into clown on stage.

Old and new is a central theme of this show. In very base ways, it goes to complex places to question what is “old.” Irwin and Shiner attempt to question the value of silent clowning by trying to use their voices in a singing duel to impress the ingénue that is McKay. Let’s just say it goes horribly. Does technology instantly make something new? In one of the more ingenious pieces of the night Irwin interacts with an iPad version of himself. The design of the dance between iPad and clown accelerates to a blown up version of Irwin consuming the smaller real life Irwin. Shiner gets a more classic character of “The Hobo” in his solo piece. It’s one of the more touching moments of the night, and is exquisitely in dialogue with technology. He literally brings life to pieces of trash.

Still nothing quite beats the simple “Three Stooges” style comedy of Irwin and Shiner unaided by any external elements. The act of causing another human being to shrink by severe poking on the shoulder is just as impressive as any digital integration. It also goes a long way to expose an essential need for pure entertainment that has been confused in recent times for “dumb entertainment.” Indeed the basic storylines are simple, but the execution takes 40 years of practice to make it seem this simple. Even McKay gives off the dual vibe of old and new simultaneously. She is at once Judy Garland, Diana Krall, Weird Al and Jenny Lewis. With original lyrics covering topics like feminists and threatening love songs, she feeds you honey laced with razor blades. She has some personal interactions with select audience members as intermission winds down that are beautifully authentic and luminous.

After a string of rather dark plays this season, and an Oscar-nominated list of films that nearly require therapy to overcome the heavy dose of mortality and evil, Old Hats is incredibly welcome, and a reminder of the joys of using a human body to make fun of the world.