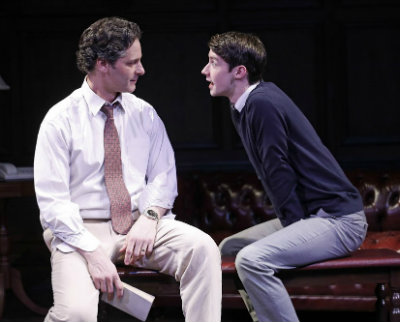 BOTTOM LINE: This revival of A.R. Gurney's 1991 work is still engaging thanks to strong acting and terrific staging.

I am sure that when A.R. Gurney’s play The Old Boy first appeared on a New York City stage in 1991 its willingness to explore the issues of homosexuality, AIDS, and the consequences of living a double life must have seemed brave and groundbreaking. This was a couple of years before plays like Angels in America and Rent gained national attention, giving focus to these issues. While the message at the heart of this play is an important one, it no longer carries the same weight as it did 22 years ago.

Much like many of Gurney's other protagonists, The Old Boy’s Sam (Peter Rini) hits old age only to find himself lost and alone. He is now onto his second marriage, which has quickly fallen into shambles, and feels a loss of idealism as a congressman. He is vying for governorship but his campaign consists of little else than standard pre-written statements fed to him by his campaign manager (Cary Donaldson). He returns to the preparatory school he once attended to give a commencement speech. While there he crosses paths with the mother and wife of Perry (Chris Dwan), another former student, who he once mentored as the “old boy” to Perry's “young boy." Perry died due to mysterious consequences which were written off as an accidental overdose.

However, after some research Sam discovers that Perry died of AIDS. Through flashbacks we see Sam and Perry’s friendship and how Sam pushed Perry to deny his homosexuality and try to be heterosexual, pushing him onto his former love interest Alison (Marsha Dietlein Bennett). As the former wife of a closeted homosexual, Alison feels a mix of hatred and love towards a man who could never give her the kind of love she needed. She soon reveals that Sam also denied her the love she wanted from him. Sam must find a way to take a stand for once in his life, to free himself from the guilt he feels towards Perry’s death and to find some form of idealism in his now heartless and corrupt life. Only by jeopardizing all that he has can Sam find a way to redeem himself.

The revelations and morale at the heart of The Old Boy hardly feel new or surprising, but perhaps that is a good thing. It shows that in the 22 years since its original production, we as a society have made immense progress: being homosexual in America is now more commonly accepted. Although predictable, this production remains consistently enthralling from start to finish. Part of this can be credited to the strong cast, particularly Peter Rini and Chris Dwan in the lead roles, as well as director Jonathan Silverstein's successful stagin.