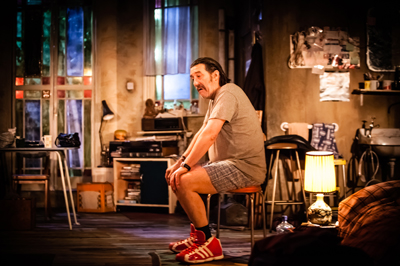 Ciarán Hinds in THE NIGHT ALIVE. Photo by Helen Warner.

BOTTOM LINE: The prolific Irish playwright and director Conor McPherson returns to the theater that is his off Broadway home with a dynamic ensemble led by actor Ciarán Hinds.

Ciarán Hinds knows how to play ruthless types. An imposing figure, he portrayed Big Daddy in last season’s Broadway revival of Cat on a Hot Tin Roof. He’s the fearsome tribal leader Mance Rayder in HBO’s “Game of Thrones.” And more than once, he’s played the Devil himself, including the last time he opened a Conor McPherson play in New York, in 2007’s The Seafarer. But in the newest McPherson premiere, The Night Alive, which the playwright directs at the Atlantic Theater Company’s Linda Gross Theater, Hinds’ intimidating bulk belies the fact that his character this time, a working class, Dublin ne’er-do-well named Tommy, is in reality a small, broken man in a downward spiral. With shifting eyes and a defensive crouch, Hinds’ performance is an astonishing study in heartrending defeat.

Since we’re in the world of Conor McPherson, it’s also a very darkly funny portrait, as Tommy casually snacks on dog biscuits and blunders his way into a fragile alliance with Aimee (Caoilfhionn Dunne), a damaged young woman whom he rescues from an attack out on the street. Tommy is a trouble magnet, though, and Aimee is yet another pathetic soul drawn into his mostly well-intentioned orbit. Others include Doc (Michael McElhatton), a friend of slow wits (or is he?) who has a knack for stirring up problems but is utterly helpless without Tommy; and Kenneth (Brian Gleeson), Aimee’s psychopathic former boyfriend, who is as close to the Devil as this play gets. Even Tommy’s supposedly stable father figure, Uncle Maurice (Jim Norton), the owner of the once grand house they share, is a fading alcoholic, debilitated with loneliness and grief.

As a director, McPherson sharpens some of the jokes in his script -- a hilariously wrong pair of sneakers figures into a couple of poignant moments. But he allows a few others to flatten out, either through comic mistiming or, in Hinds’ case, occasionally garbled diction. However, he consistently draws deep performances from his ensemble, as he did with The Seafarer, which also starred Hinds as well as the wonderful Norton, who won a Tony Award for Best Featured Actor that year. All five performers in The Night Alive were in the world premiere at London’s Donmar Warehouse this summer and all are excellent. Gleeson, in particular, brings an unpredictable mix of mordant humor and bristling terror into his scenes. If there’s any justice in the theater world, McPherson’s compatriot of Irish drama, Martin McDonagh, will write a piece for Gleeson to star in along with his better-known father and brother, actors Brendan and Domhnall (both of whom are McDonagh veterans). The younger Gleeson’s performance here is a triumph of razor sharp intelligence.

The Night Alive is in some ways a typical McPherson play, in other ways it’s a departure. The actual ghosts and demons that populate much of his oeuvre are missing here, although, if you let the play take you on its journey, there are hints of mystery and the supernatural before evening’s end. Maurice’s liquor-soaked ramblings aside, alcohol doesn’t play nearly the central role that it does in McPherson’s earlier works. The playwright himself has made no secret of emerging from his own addictions just over a decade ago, and his work since then has somewhat reflected that positive turn.

Make no mistake, the souls of The Night Alive have been through the mill. But, as with most of McPherson’s later plays, there are faint glimmers of hope for them, which peek through the shadows, like the sickly but persistent rays of sun in Neil Austin’s evocative lighting design. Set and costume designer Soutra Gilmour mutes the easy laughs that could have been drawn from the life of squalor in which these characters live. Instead, she effectively offers up a subtly grimy sanctuary for Tommy and his fellow travelers as they try to sort their lives out. Their varying degrees of success and failure in doing so are at the root of McPherson’s story.


(The Night Alive plays at the Atlantic Theater Company’s Linda Gross Theater, 336 West 20th Street, between Eighth and Ninth Avenues, through February 2, 2014. Performances are Tuesdays at 7PM; Wednesdays at 2PM and 8PM; Thursdays and Fridays at 8PM; Saturdays at 2PM and 8PM; and Sundays at 3PM and 7PM. Special performances on Monday, December 23rd and 30th at 7PM. No performances on December 24th, 25th, and 31st. Tickets are $20-$65 and can be purchased online at ovationtix.com or by calling 866.811.4111.)