To purchase tickets and for more information visit www.hauntedhousenyc.com 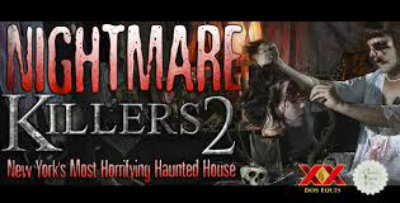 There are certain conventions we’re all used to at a haunted house: loud banging noises, utter darkness and pushing our way through tight spaces. Most haunted houses of course have the caveat that you stay in contact with the rest of your group at all times and that the actors do not touch you. This is where Nightmare: Killers2 breaks the mold. Before entering the labyrinth, I was ‘marked’ with a bloody X. This enables the performers to give a decidedly more interactive experience. I thought this would mean I might get pushed around a bit -- but when the horrific ‘monsters’ of the night are real-life killers such as John Wayne Gacy and Harrison Graham, things take a much more demented turn.

Structured in a free form manner, the groups are smaller (my group was two individuals) and far more intimate than a typical haunted house. Some scenes have definitive endings while others leave you wondering if it is safe to move on. I found the more successful sequences to be those that were straightforward and directly interactive with the audience (and be warned, if you are the lucky one in your group to get thrown in the basement: keep your body close to the ground and don’t hit your head like I did!).

The scenic elements are sometimes exquisite and mostly immersive. In the rooms where corpses have been left for days, there’s a definitive odor. Charles Manson’s final room has lighting and music to inspire Helter Skelter tendencies. The aforementioned basement was creepy and the one truly terrifying moment of the night. There was obviously a good amount of effort put into this gauntlet to justify the ticket prices.

Alas, as indicated by the title this is a sequel to last year’s Nightmare (which I missed thanks in part to a very terrifying entity by the name of Sandy) and thus seems to scrape the barrel a bit in its effort to fill the roster. Some of the participating personalities are fictional (Patrick Bateman from American Psycho) and others are debatably not that horrific (Aileen Wuornos, Charlize Theron's character in the movie Monster). Also, as we are dealing with existing characters, there is a large amount of time spent on exposition -- which could have potentially been utilized for more actual scares.

While it may not have been the scariest event in my Halloween roster, Nightmare: Killers2 is the one most likely to induce nightmares. For once, your girlfriend will likely be laughing at you being scared (I’m used to seeing guys protecting their wailing other halves in these types of things, but since most of the killers have male targets this paradigm is a refreshing change).

(Nightmare: Killers2 plays at the Clemente Soto Velez Cultural Center, 107 Suffolk Street between Rivington and Delancey, through November 2, 2013. Tickets are $30-$60. To purchase tickets and for more information visit www.hauntedhousenyc.com.)