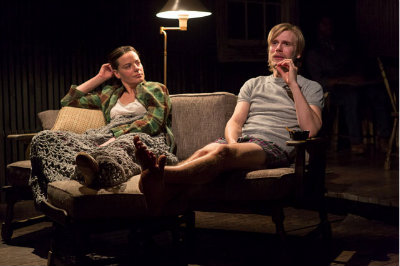 Danielle Skraastad and Zachary Booth in THE MOUND BUILDERS. Photo by Richard Termine.

BOTTOM LINE: An elegant revival exploring a disintegrating family that often fails to plume the depth of the writing.

Set during an archeological dig in the 1970s, Lanford Wilson’s The Mound Builders explores the relationships of a scientific team, their spouses, children, and the townspeople. This revival by Jo Bonney at the Signature Theatre looks handsome enough, but manages to excavate little of permanence.

Told a year after the main events of the play, Augustus Howe (David Conrad) looks back at snapshots of the family and friends -- relationships that will have been destroyed by the end of the play. Holed up in a ramshackled old house (beautifully conceived by set designer Neil Patel) tensions should be mounting. His wife Cynthia (Janie Brookshire) is having an affair with Chad Jasker (Will Rogers), a local landowner. Howe’s research assistant Dan Loggins (Zachary Booth) seems to have a perfect marriage with Jean (Lisa Joyce), who is expecting their first child. But Jasker also has passionate feeling for Jean, and perhaps even Loggins. To make matters worse, Howe’s sister Delia (Danielle Skraastad), a famous novelist and immoralist, arrives fresh from rehab and parks herself on the couch. And this is to say nothing of the mounting value of the land where the dig is occurring, and the threat of highway construction.

Despite a steady pace and a pulpy plot, the production often fails to explore the undercurrents that will eventually implode this seemingly congenial family. Wilson’s dialogue contains so many possibilities of suggestive backbiting, and while the cast is universally strong, they never seem to gel as an ensemble. The few moments of silence are the strongest, and perhaps the only times when the characters seem to understand that their world is crumbling. Especially beautiful are the instances when Rui Rita’s lighting takes over the house, transforming it all too briefly into a magical realm.

Partway through the second act, the play jolts awake with the discovery of a golden death mask. But as the action speeds ahead to its inevitable conclusion, it’s difficult to care about the fate of these characters. As Howe continues to sift through photographs, attempting to understand the fate of his loved ones, we realize that there might not be anything worth finding in the rubble.