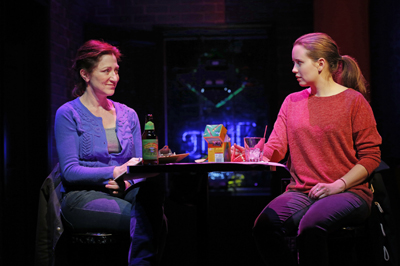 Edie Falco and Phoebe Strole in THE MADRID. Photo by Joan Marcus.

BOTTOM LINE: A look at family relationships -- particularly between daughters and mothers -- that has a lot to say but doesn't always do so explicitly.

I went into The Madrid with high expectations. Playwright Liz Flahive and director Leigh Silverman are the team behind From Up Here, an insightful comedy about a family trying to cope under extreme stress, which played at MTC in 2008. The Madrid is born from a similar topic –- the examination of familial relationships during hard times –- but it paints such thin portraits of each character that it's hard to really connect with anyone in the story or understand their choices.

Martha (the always magnetic Edie Falco) is a mother undone. Her only child Sarah (Phoebe Strole) is grown up now and Martha is finally able to leave her family behind and cut the ties that kept her captive. The kindergarten teacher abruptly leaves school one day (putting the adorable Brooke Ashley Laine in charge), never to return. And what transpires in The Madrid is a family's quest for closure in the face of unexpected abandonment.

Martha eventually surfaces after several months, visiting Sarah at her job at Starbucks, just as her husband John (John Ellison Conlee) is planning a cathartic garage sale to get rid of her possessions and the family furniture. Martha wants to sort of reconnect with her daughter, and the two begin a friendship that introduces Sarah to Martha's new city life in downtown Chicago, including her new apartment in a run-down complex called The Madrid. Sarah gets to know Martha as an adult. Though Martha is clearly mentally preoccupied, the pair learn about each other anew.

I had a difficult time understanding Martha's motivations, even with the inimitable Ms. Falco in the role. The play does little to explain why Martha abandons her family, an act that we learn is a long time in the making but is nevertheless a gut-wrenching shock to her loved ones. Martha's mother Rose (Francis Sternhagen) even crashes her car in the hopes that an accident will bring Martha home and to her senses.

The Madrid seems to want to explore the other side of traditional domesticity, to show what happens when these norms are subverted because, after all, people are complex. What happens when a doting mother and wife (a kindergarten teacher for god’s sake!) makes the decision to leave it all behind and start fresh? This is a fascinating question and one I’m more than willing to invest in. But in this observation, the play seems to condone irresponsibility, even make it a human right. And this makes it difficult to understand why Martha behaves as she does. Unfortunately, ambiguity just muddies the story further. And really, this is Sarah’s story, not Martha’s. Sarah, an only child, takes her mother’s place, moving back in with her father and even substituting in Martha’s classroom. Yet Sarah soldiers on, accepts these burdens, and shows only moderate amounts of frustration as she deals with her new responsibilities. The story isn’t really about The Madrid -- Martha’s new home -- it’s about the home, and the people, she leaves behind.