Written by Mariah MacCarthy in collaboration with the cast and Leta Tremblay; Directed by Leta Tremblay
Produced by Caps Lock Theatre

Off Off Broadway, New Play
Runs through 6.16.13
An undisclosed Astoria apartment near the Ditmars Blvd N/Q subway stop (you’ll have to buy a ticket to find out exact location) 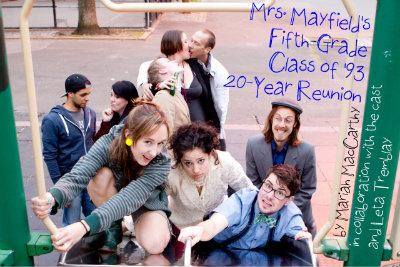 BOTTOM LINE: Grab a few friends, hop on the N train and go see this immersive play where you can voyeuristically intrude on one of the most ridiculous and absurd house parties you’ll ever go to.

You’ve got to love school reunions. Those nights where you get to see how you’ve all grown up, the guy who got fat, the girl who grew boobs, the idiot, the bully and all the rest of the colorful characters that make up almost anyone’s class. Now take those characters, add any remaining stereotypes you can possibly imagine, throw in a cocktail of booze and drugs and you have Mrs. Mayfield’s Fifth-Grade Class of ’93 20-Year Reunion, a highly comical, quite ridiculous and incredibly absurd experience. But in spite of all the craziness, just like at the end of your real school reunions, you’ll be happy you went.

Mrs. Mayfield’s... is an immersive play which brings together a group of misfits for a school reunion with all our heroes pushing the respectable age of 30. Located in a smallish Astoria apartment, as an audience member you get to roam around the rooms following the characters you find most intriguing. It’s a great experience as you can completely ignore social protocol and shove your nose in conversations you find interesting, and leave mid-sentence once you’ve gotten bored. If only all house parties had these rules!

As you arrive the atmosphere is wonderfully informal, you can grab a drink from the fridge (in exchange for a modest donation), and casually chat to the other audience members -- in fact, I was so relaxed that I didn’t even notice when the first actors came out. However, they soon made their presence felt. Veronica (Elizabeth Seldin), the attention seeking former fat girl from class arrives with her husband the financier. Once they realize that conversation is not going to get them the attention they need, they resort to shouting, squealing and making out with almost every other cast member in the room (as you do). Crystal (Lauren Hennessy), formerly Chris during fifth grade, impressively does some breakdance boogie moves in high heels to the tune of Michael Jackson, before she makes out with another colleague who has become a lesbian and is slightly neurotic. Amanda (Nicki Miller), the host of the party, jumps rather rapidly from love to hate in her interactions with her hedonistic ex-boyfriend who has crashed the party and “lubricated” the crowd with some powdered mushrooms. Then there’s the Harvard scientist who’s frustrated at the fact that his wife has become the breadwinner and who gets drunk at the party for the first time in his life while consoling the younger brother of Billy, who shot himself in the head when he was ten. Sound bizarre? Well it is, and it’s pretty hilarious too.

Mrs. Mayfield's... does a good job of combining smaller interactions between the characters dispersed around the rooms, with moments where the actors regroup around the center of the apartment in order to capture the attention of the entire audience. I rather liked these separate parts as they provided sufficient variety to keep the audience engaged in a small space during almost 100 minutes -- no easy task. These regroupings of the actors usually provided for the most engaging and dramatic moments of the play. For example, in one, Angela opens a time capsule from fifth grade and reads a letter written to future older self. In another, one of the characters demands that the rest do not keep bringing up the memory of his dead brother as he storms out of the house with a bang.

Admittedly, with characters so extreme and situations so dramatic, the play at times can become tedious and a little over the top. I also thought the play could have been a little shorter as I sometimes had the impression that keeping up the intensity for so long de-sensitized the audience. But to the cast's credit, I never felt disengaged for too long, and there would always be some comical moment that would liven up the current scene.

The experience of being a close-up spectator in this Astoria apartment with such a bunch of misfits is wonderful, delightful and will give you plenty to chat about on the potentially long subway ride back home. I really can’t recommend this play enough -- and at $18 it's an absolute bargain -- as it will likely be a highlight of your theatrical year.

(Mrs Mayfield’s Fifth-Grade Class of '93 20-Year Reunion plays at an undisclosed Astoria apartment near the Ditmars Blvd N/Q subway stop. Performances are Thursday, June 6th; Sunday, June 9th; and Wednesday, June 12th through Sunday, June 16th. All performances are at 8PM. Tickets are $18 and can be purchased online at mrs.mayfield.brownpapertickets.com or by calling 800-838-3006.)