The Merchant of Venice
By William Shakespeare; Directed by Mark Harborth

Off Off Broadway, Play Revival
Runs through 8.4.13
The Gallery Players, 199 14th Street, Brooklyn 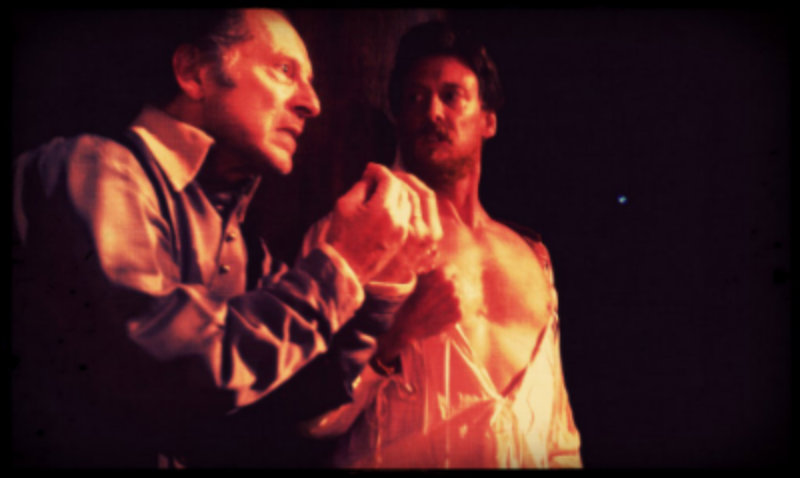 Dominic Cuskern as Shylock and David Patrick Ford as Antonio.

BOTTOM LINE: An uneven production of a Shakespeare classic.

The folks at Brooklyn’s Gallery Players take a swing at Shakespeare this summer with a new production of The Merchant of Venice. Although most of the production fails to generate many thrills or even laughs, there is an undoubtedly committed central performance from Dominic Cuskern that admirably highlights the intricate complexities of Shylock.

In Merchant, the ardent Bassanio (Hunter Hoffman) needs money to travel to Belmont to court Portia (Erin Beirnard). While the melancholy Antonio (David Patrick Ford) can’t front the loan himself, he suggests asking Jewish moneylender Shylock (Cuskern). Shylock agrees, with the stipulation that if the money isn’t paid back in full then a pound of Antonio’s flesh shall be his.

The production suffers from over-the-top Shakespearean line deliveries, a lack of chemistry between the actors, and an excess of modern mannerisms that distract. The game of each scene needs to be heightened and further explored. For example, it’s fine to have Portia and her ladyservant Nerissa (Louise Stewart) casually sitting on a block, but their spirited, gossipy "girl talk" never ignites. At times, it seemed as if Mark Harborth directed the actors to look straight ahead as opposed to engaging with their scene partners, bringing about missed connections and unclear intentions. At other times, they shuffle around aimlessly when they need to stay grounded. Diction and volume issues plague key scenes: Elliott Mayer goes balls-to-the-wall as Morocco (a potential Portia suitor) but I had no idea what he was saying.

This Gallery Players mounting hits home where I least expected it. I was pleasantly surprised by the start of Act II, which took a low-key, Midsummer Night magical turn. The addition of musician Luke Hofmaier is an offbeat, welcome choice. Harborth’s direction is tightest here, with well-rounded, lovely stage pictures and actors actually listening to each other. If the easygoing, relaxed vibe that took over this scene melted over the whole production, it’d be a hit. The key? Actors: stop trying so hard.

As Portia, Beirnard is calm and collected, providing a nice stability and structure throughout sometimes shaky staging. Colin Dweir’s broey interpretation of Gratiano fully works and I somehow completely bought his romance with the more subtle Nerissa. And Dominic Cuskern (the most established performer in the cast) brings a whole different level of professionalism to his Shylock. When he’s on stage, you’re hooked.

Sidney Fortner’s costume design is grand and detailed while Scott Andrew Cally’s lighting design lacks… light. So many sequences are dramatically underlit; I was literally straining to see the actors. Jacob Subotnick’s sound design offers a burst of liveliness to a town dungeon or the opening of gold, silver, and lead caskets. Throughout the show, there were moments that absolutely popped. It just makes me wish there was more fire, more stakes, and more clarity in the ones that didn’t.

(The Merchant of Venice plays at Gallery Players, 199 14th Street in Brooklyn, through August 4, 2013. The remaining performances are Thursday, August 1 through Saturday, August 3 at 7:30PM, and Sunday, August 4 at 3PM. Tickets are $14-$18 and are available at ovationtix.com.)