Tickets were available at the door only. 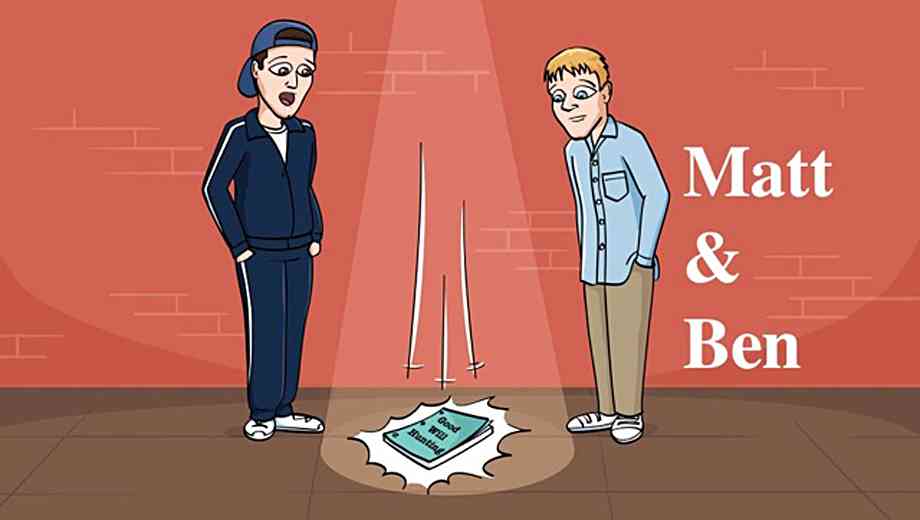 BOTTOM LINE: Two actresses play Ben Affleck and Matt Damon in a comedy that premiered in the NYC Fringe Festival in 2002.

Matt & Ben premiered in the NYC Fringe Festival in 2002, featuring Brenda Withers and Mindy Kaling as up-and-coming stars Matt Damon and Ben Affleck respectively. The setting is Somerville, MA in 1995 in the apartment of Mr. Affleck. We are introduced to our two boyhood friends as they adapt the novel of Catcher in the Rye into a screenplay. Their differences quickly become apparent: Matt’s a hard worker and super smart, Ben’s really cool but can barely spell. Then, bam! Good Will Hunting literally falls from the sky into Ben’s living room. Tension rises as the two decide how to move forward with having this brilliant, life-changing script in the palm of their hands.

Jamie Bock (Matt) and Manini Gupta (Ben) have a sincere, easygoing chemistry and they ably move the madcap action forward. Director Mickey McGuire effectively scuttles the actors in and out of the living room when they’re required to play cameos. Some of the loopiest yet most solid moments in the script are the Gwyneth Paltrow and J.D. Salinger visits. Gupta hilariously embodies a Gwyneth who can’t get over how attractive Ben is. And seeing Bock shuffle around, hunch-backed, as the aged Salinger is worth the price of admission alone.

The play itself loses momentum when it veers into an overdramatic territory that doesn’t hold up in the otherwise zany world. The realism of Ben and Matt actually going at each other doesn’t work at all; it’s tonally wrong. Not that the comedy is perfect either. At one point, I had to ask myself “Is the show just dated?” It’s not. It’s just not a very concrete comedy. Kaling has, for sure, moved on to bigger and better.

Luckily, we’ve got two game performers, solid direction, a perfect set design and lovely lighting by Kristopher Weaver to keep our minds off the so-so script.