$10 for students and seniors 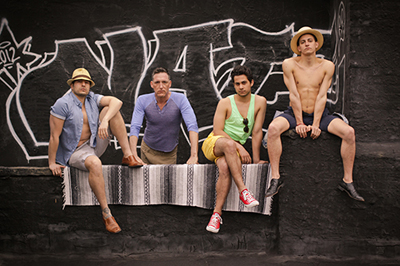 Fidel Castro once said, “A revolution is not a bed of roses.” The characters in the new play Mariquitas are people who desire revolution in their own lives, who seek to make a dramatic change for freedom, for independence, for change itself. Unfortunately, in its current incarnation now playing at Theater for the New City, not much feels revolutionary.

Ramon shares his gay-friendly B&B with his lover, Ricardo, an aging hustler. For Ramon, Ricardo represents something more than a business arrangement, but Ricardo has begun to succumb to a pressure to marry and reproduce. Now Ricardo must find a way out or Ramon’s home that allows him the money to support a new family. Tito and Cristobal have families to support as well, but they also serve at the whims of their financers. This is a bit easier for Tito, whose Spanish benefactor Jose Maria visits Cuba only occasionally. But Jose Maria has now returned to Cuba to see his beloved Tito one last time before he dies.

But Ricardo, Tito, and Cristobal are not necessarily tragic cases forced to commit sexual acts against their will; in fact, these men, despite their insistence that they’re not Mariquitas (homosexuals), enjoy the intimate contact of men. In fact, they engage in it whenever they get the chance, even with each other.

In Mariquitas, playwright Eduardo Machado mines the rich contemporary culture of Cuba to reveal the strange dichotomy within male hustlers who offer their services (and enjoy it) to wealthy European clients (or anyone with the money) yet, at the same time, feel a societal-driven need to express their masculinity. These are men who, in other circumstances and in another place, might be openly gay, but in Old Havana, they are husbands, fathers, and providers -- which they take on as a mark of pride.

In the nearly three hours in which the play unfolds, Machado attempts to tackle everything from love and sex to sexuality, from politics to spirituality, from slavery to liberation. At its best, the script is an exercise in mood and setting as well as a peek into a fascinating culture. With Jose Maria’s looming death, Mariquitas has the poetic weight of Tennessee Williams. In fact, there are so many delicious dramatic opportunities to explore within this script, it’s a shame Machado doesn’t spend enough time on any one to really resonate with the audience.

In what comes across as an early draft of what will eventually be a great script, Machado doesn’t allow his characters to reveal themselves through action but through forced dialogue; he tells when he could easily show. Ramon, for example, tells anyone, even out of context, about his failing relationship. He wanders sadly around, saying things like, “I feel so alone.” Or in the case of a dying Jose Maria, we’re often taken out of the emotion of his tragic life and impending death when he says things like, “I love you like an addict loves his heroin.” The production could easily lose that pesky third hour if Machado trusted his audience a bit more and avoided having his characters spoon-feed the audience revelations that we had already deciphered by watching the characters interact.

But any possibilities the script may possess are blown to bits by a confusing and lackluster production. Under the direction of Michael Domitrovich, the cast’s excruciating pacing issues cause them to miss the big emotional beats in the script. Jose Maria’s death is an exercise in melodrama, Tito’s recurring possession is more silly than poignant, and the sex scenes lose all the Cuban heat you would wish for in exchange for that awkward moment of watching (most) actors trying to cover their naughty bits. In exchange, we get a significantly long argument that includes male nudity which I suppose is meant to convey vulnerability but instead induces head-scratching –- “Why doesn’t he just put on some clothes?”

But those types of questions continually pop up and interfere with the story. Why do all of those characters walk around whatever that set piece is supposed to be when that other character climbs over it like it’s an obstacle? Why does someone answer a cell phone, not a landline mind you, and say, “I told you never to call me here. It’s not my house.”? Why does the lighting suddenly change for no reason time and time again, even in outdoor scenes (apocalypse?)? Why do these older men, who apparently pay the younger men to “top” them, constantly have their hands obnoxiously stuck up the younger men’s backsides? Had it been just one or a few of these irrational choices, I wouldn’t nitpick, but seeing an entire team of artists miss these things is, to say the least, frustrating.

However, I would be remiss not to mention a breakout performance in the production. As Cristobal, Ricardo Davila recognizes that his character is often a source of laughs. The most effeminate of the hustlers, he is also a father and husband, and he takes this very seriously. Davila, however, crafts a character with the depth to understand the high stakes and everything that these men could easily lose. He enjoys the lifestyle, but he recognizes that it is work. Davila conveys a sense of apprehension and dread that gives the production the type of weight that Machado intended.

If for no other reason than to learn about this fascinating pocket of sexual liberation and its grating clash with tradition, Mariquitas is worth a watch. My only hope is that at some point down the line, a revised script pairs with a tighter production to give this play its due.

(Mariquitas plays at Theater for the New City, 155 First Avenue between 9th and 10th Streets, through May 19, 2013. Performances are Thursdays through Saturdays at 8PM; Sundays at 7PM; and additional performances Wednesday, May 8th and 15th at 8PM. Tickets are $15, $10 for students and seniors, and are available at theatreforthenewcity.net.)