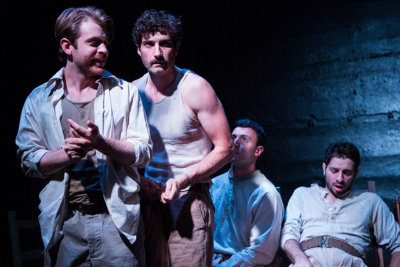 BOTTOM LINE: Luft Gangster is a well-written, well-executed play based on the experiences of playwright/leading man Lowell Byers' cousin Lou Fowler as a P.O.W. in WWII.

Luft Gangster tells the true story of a group of P.O.W.s in Germany’s Stalag Luft VI, a camp far north in the Reich’s territory used to detain British, Canadian, and American Air Force NCOs. Lowell Byers wrote the piece after interviews with his cousin Lou Fowler whom Byers portrays with sensitivity, charm, and emotion.

After Lou Fowler’s mother passes away, he follows his brothers and enlists. When his plane is shot down, he survives but is captured by the Germans who interrogate him, torture him, and then ship him to an internment camp. In the camp he meets other captured British and American soldiers who band together in the struggle to survive the deadly prison conditions. The men know they must escape or live to see the end of the war, but death and violence permeate their lives.

The script is solidly written, emotional, with both beautiful speeches and sharp episodic scenes, and it comes to life effortlessly under Pendleton’s solid, decisive direction and thoughtful, committed concept.

NyLon Fusion brings together a stunning ensemble of talented, tender actors. The cast stand out as individuals while also creating an immaculate esprit de corps. Kyle DeSpiegler is charismatic and calamitous as Joe, the trustworthy and caring mediator. Ralph Byers (Broadway's The Music Man) plays the sinister Nazi office Otto with subtly and specificity, and Casandera M.J. Lollar and Gabe Bettio bring feeling and fullness to their supporting roles. The magnetic Noel Joseph Allain (Blue Bloods) is striking and powerful as the leader of the prison resistance. And at the center of the play Lowell Byers effuses the theatre with his humanity, earnestness, and heart.

Luft Gangster is a moving, warm play marked by bravery, camaraderie, and a loving look into the bond formed by good men in impossible circumstances. The show is thrilling, seamless, and real. Go to Luft Gangster and you will laugh, cry, and be impressed by the immaculate product of talented artists coming together under a clear vision.

(Luft Ganster plays at the Dorothy Strelsin Theatre, 312 West 36th Street between 8th and 9th Avenues, through August 24, 2013. Performances are Wednesday, Thursday, and Friday at 8PM, and Saturday at 3PM and 8PM. Tickets are $18 and are available at brownpapertickets.com.)