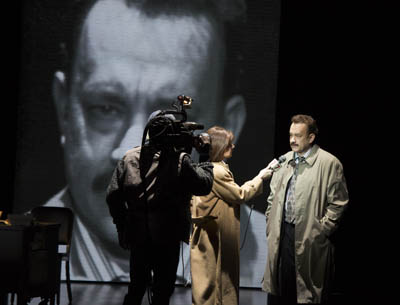 BOTTOM LINE:A first-rate production of a love letter to journalism.

Nora Ephron's Lucky Guy is a highly likeable production. The late queen of the rom-com excelled at presenting flawed but endearing characters (see her classic flicks Sleepless in Seattle and You've Got Mail for proof). And Tom Hanks makes Mike McAlary the consommate unintentional schmuck in Ephron's final dramatic endeavor (Ms. Ephron was still working on Lucky Guy when she died in June 2012).

In the biographic Lucky Guy we follow journalist Mike McAlary as he works his way up the ranks until he becomes a super successful columnist -- a lucky break takes him from his neighborhood beat in Queens to the main floor of the paper, and the rest is history. I suspect that this play could be about any self assured professional who uses his charm and his scrappy ambition to get to the top. But Nora Ephron was a journalist herself, and this play is a love letter to journalism.

McAlary's story is as intriguing as any about a guy with talent and drive who fights for the career of his dreams, making mistakes and sacrifices on the way to the big leagues. The plot is not likely to grab your attention alone, but Lucky Guy's success radiates from the artists telling the story, not from the story itself.

George C. Wolfe's direction is impeccable and in complete harmony with Ephron's script. The story is told largely as a narration with the cast -- a Greek chorus of newspapermen -- keeping the audience abreast of the action as the story unfolds. The characters speak directly to the audience, creating an inclusive and familiar sensibility, and the spacing of these interactions is rhythmically satisfying, driving the entire production. Wolfe takes good care to keep the momentum building; the design aesthetic supports this with highly effective yet minimalistic set pieces (naturally on wheels to zip on and off the stage with ease). Lucky Guy's lighting design (by Jules Fisher and Peggy Eisenhauer) is equally beautiful, almost distractingly so at times, and the perfect complement to David Rockwell's efficient set.

The cast is equally delightful, a real boy's club with all the scotch and camaraderie you'd expect. In fact the one woman in the newsroom (played by Deirdre Lovejoy) makes it a point to tell the audience that she is fully aware that she is the odd girl out in this work environment. Hanks has full command of the stage (you'd never guess that this is his Broadway debut); he does impressive work bringing McAlary's story to life. And Maura Tierney plays McAlary's loyal wife with grace. Really everyone in the cast offers passionate performances that echo the energy of the newsroom.

While Lucky Guy is by no means the best thing playing in New York right now, I do imagine it would be hard to have a bad time at this show. The sheer talent of the artists on an off stage is evident throughout the performance and Ephron's script is as charming as ever. Passion is contagious, and Ephron's love and respect of journalism is worthy of our attention.