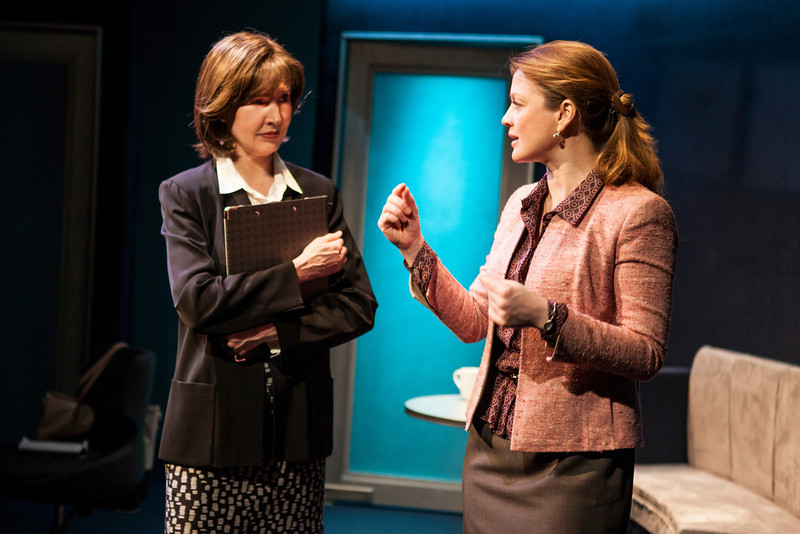 BOTTOM LINE: This intriguing but ultimately disappointing drama focuses on one psychotherapist whose primary project is to heal from her own family trauma.

Love Therapy opens onto one of the starkest, most bland sets imaginable. On stage left, there’s a straight-backed chair facing a tiny café table, barely big enough for two cups. On stage right, two chairs sit opposite each another. That’s it, no art, no personal items, no clutter. But as the play slowly unfolds, the non-descript setting becomes irrelevant and it is abundantly clear that the talking cure does not require bells, whistles, or ornaments.

What it does require is good listening, and Colleen Fitzgerald (well played by Margot White), a post-graduate trainee in Rogerian psychology — her specialty is going to be couple’s counseling — is impatient with the process and opts to act as friend, mentor, and sounding board for the clients she sees. Her supervisor, Carol, (perfectly enacted by Janet Zarish) is a straight-laced, by-the-book overseer. She is aghast at Colleen’s unconventional methods and chastises her protégé for becoming too familiar with her clients, even going so far as to hug them. While Colleen sees the gesture as a show of authentic affection, Carol is adamant that physicality violates the professional code. In fact, she’s so annoyed that she takes some of Colleen’s clients away from her and sends her back to the classroom to review the theoretical underpinnings of the profession.

For her part, Colleen pooh-pooh’s Carol’s rigidity and instead focuses on doing everything she can to help her remaining clients: Mary (also played by Janet Zarish), a grieving, middle-aged widow; Brian (Christopher Burns), a raging misogynist in the throes of a messy, contested divorce; and Steven (David Bishins), a charismatic, married womanizer. As personal and professional boundaries blur with all three, Colleen becomes more and more confused and agitated. Questions mount. Can she answer Steven when he asks about her background? Why isn’t it okay for a therapist to speak to a client about her own struggles? How should she handle Steven once he discovers that she is divorced, lonely, and looking for love? Even more troubling, Colleen wonders whether a true bond with another person — the ostensible goal of most therapy — is even possible without reciprocity.

Sadly, Colleen has no one to ask. Or does she? Madge (Alison Fraser), a sassy Irish-immigrant waitress, sees Colleen each day before she heads to the office and can tell that something is bothering the young woman. Brash, confident, and eager to push her way into Colleen’s life, Madge doesn’t really understand therapy or why people pay good money to confess their secrets to strangers. What everyone needs, she says, are family, friends, and community. Throw in a trip to Vegas, a couple of drinks, some good sex, and a visit to a competent hair stylist, she chortles, and everyday problems pretty much vanish. It’s an appealing worldview, and Colleen wishes she could throw caution to the winds and head to the slots — or at least get onto the dance floor. Suffice it to say, she can’t, thanks to inner tumult and major angst.

Love Therapy introduces important issues about relationships, therapy, and the human need for connection. The dialogue is well-paced and provocative. Unfortunately, the denouement falls flat and the play seems to stop rather than conclude. While Colleen’s demons provide a sound foundation for the exploration of the psychotherapeutic process, the play does not go far enough. Rather than fully probing the many issues it raises, it opts for safety and predictability. As the curtain falls it seems obvious that a more insightful and demanding therapist is needed.