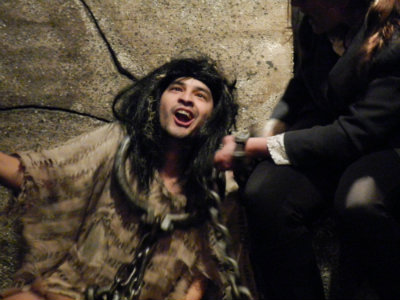 The idea of Shakespeare heroines battling zombies is an undeniably intriguing one and perhaps there is potential somewhere in the story, but it is unrealized as the performers of Living Dead in Denmark wade through a script rife with adolescent humor and unimaginative utilizations of various Shakespearean characters. Playwright Qui Nguyen takes little time to explore why he is using these specific characters to tell his story, and shortly after the first “pull my finger” joke it becomes apparent that this isn’t a clever shout-out to Shakespeare’s work but merely a piece using The Bard’s brand recognition to entice audience members. The script aside, Just Kidding Theater Company’s production of Living Dead in Denmark still feels confused as to who its audience is, advertising the play as a gore fest with free beer but then humorlessly censoring profanity and throwing in crotch shots into nearly every fight scene.

The story goes that Ophelia awakens to find herself in the care of Hamlet's old enemy Fortinbras. He explains that while she was "in a coma" a Zombie Apocalypse occurred and now it is her destiny to fight with Juliet and Lady Macbeth against hoards of zombies led by an undead Hamlet. There are a few twists along the way as the trio discovers there may be more to themselves than they realized. Jesse Gabriel’s performance stands out in a number of supporting character roles, most notably as a Caliban, who ends up groaningly compared to Sloth from the 1985 Spielberg film The Goonies. As with that reference, several other homages to the past few decades of entertainment seem to miss their mark, for instance a fight in which zombies appear dressed as the Teenage Mutant Ninja Turtles or even the mildly offensive Brokeback Mountain jokes referencing a secret tryst between Lady Macbeth and Juliet leading me to ask, are we still making jokes like "I ain't no queer.”

One fight scene between Hamlet (Matthew Mollenkopf) and Horatio (Elohim Peña) stands out as well-executed and engaging. But at another point in the play there is a slow motion battle that begins with a character shouting out, “Oh no, slow motion,” which goes on to present itself like children play-fighting on a playground. At the onset, the opportunity to sit in a “splash zone” at a play sounds like a fun time, but unfortunately the piece itself doesn’t deliver enough entertainment to make the occasional spray of blood that accompanied a zombie slaying enjoyable in that ‘haunted house surprise’ way that it could. Overall Living Dead in Denmark has the best intentions of putting on an action/thriller but unfortunately those intentions become muddled with juvenile humor and unconvincing brawls.

(Living Dead in Denmark plays at The Gene Frankel Theatre, 24 Bond Street, through April 21, 2013. Performances are Mondays through Saturdays at 8PM and Sundays at 2PM. Tickets are $35 for “Splash Zone” or $25 for general admission and include a free Brooklyn Beer. Tickets are available online at https://www.brownpapertickets.com/event/324234.)