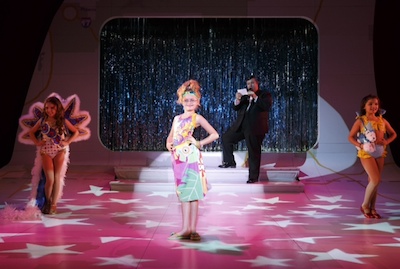 BOTTOM LINE: The great William Finn is back with a quirky, heartfelt musical adaptation of an Oscar-nominated tale of misfits, Proustian desire, and beauty pageant dreams.

There is no musical theater score like a William Finn score. The creator of such quirky classics as The 25th Annual Putnam County Spelling Bee and the Marvin Trilogy, which includes March of the Falsettos, Finn is back with a screen-to-stage adaptation of the 2006 indie movie hit Little Miss Sunshine, which runs off Broadway at Second Stage through December 15. The composer’s signature blend of jazzy pop melodies, lush ballads, and acerbic lyrics are a welcome contrast in a town where, to get memorable theater melodies, you often have to plug in a jukebox.

This isn’t to say that it’s all one smooth ride for Sunshine, which is directed by its book writer and longtime Finn collaborator James Lapine. The show gets some small things wrong, but it also gets some big things right.

On one level, the story seems tailor-made for Finn, whose best works often trace the journey of individuals deeply out of place in the world around them. Like the hapless spellers of Putnam County or the neurotic men and boys of Falsettoland, the Hoovers in Little Miss Sunshine also have to think outside the box to redefine what makes a family. They struggle to fit in and, in their failure to do so, ultimately triumph. It was a brilliant stroke by the original screenwriter, Michael Arndt, to set such a tale in the appalling landscape of children’s beauty pageants. And when the first line of Finn’s musical version is sung, “Dreams that shouldn’t die, die,” you know that Arndt has found a like-minded soul.

The danger is that his movie rides a razor’s point between dark comedy and treacly sentiment, and Lapine doesn’t always successfully negotiate that line. Certain rough edges have been smoothed out, to the detriment of the narrative. One visible example is that nine-year-old Hannah Nordberg’s dynamic performance as Olive Hoover is somewhat undercut by the puzzling decision (by Lapine’s production but not by his script) to minimize the difference in her body size. In the movie, the poignancy of Abigail Breslin, who wore obvious padding to give her body distinctly un-Barbie-like curves, was that you knew she didn’t stand a chance in an industry that rates the worth of a grade-school girl based on how sexy she is. That almost tragic knowledge informed nearly every one of Breslin’s scene, including the funny ones. In the musical, Olive’s choice of song and wardrobe for her climactic pageant number (influenced by her coke-snorting grandfather, who is nicely underplayed by David Rasche) may be wildly inappropriate. But the undramatic truth is, Nordberg is just as cute and perky as her girly competitors.

Lapine’s adaptation also rushes a moment or two, such as when Olive’s nihilist brother, Dwayne, watches his own dreams disintegrate before his eyes. Dwayne is played by Logan Rowland with a strong combination of sullenness and vulnerability, and it’s no fault of his that the crucial scene doesn’t pack the wallop that it should. It’s just not given enough time to breathe. And it could have if other less necessary moments had been cut back. Stephanie J. Block and Will Swenson are fine as Olive and Dwayne’s parents, and their voices blend beautifully (kudos to sound designer Jon Weston, by the way). But one song they sing backstage during Olive’s fateful pageant gives an unnecessarily obvious summation of the show’s “United We Stand” motif. Equally blunt are the overly cartoonish ways in which supporting characters played by Wesley Taylor, Josh Lamon, and Jennifer Sanchez are drawn. One of the pleasures of a typical William Finn musical is that it doesn’t try to spoon-feed the story. There are moments of Little Miss Sunshine that almost seem as though they’ve been market tested.

One aspect of the show, however, that does maintain its freshness and bite is the wonderfully evil coterie of pageant contestants played by Leonay Sheperd, Miranda McKeon, Alivia Clark, and Victoria Dennis. Sheperd, McKeon, and Clark, especially, have delightful moments as a little Greek Chorus trio from Hell, haunting Olive’s nightmares. They pump energy into every scene in which they appear.

Also excellent is Rory O’Malley as Uncle Frank. O’Malley was nominated for a Tony Award for playing a screamingly chirpy missionary in The Book of Mormon. Frank, a profoundly despondent Proust scholar, could not possibly be a more different animal and O’Malley plays him with a gentle, subtle touch.

A key to Little Miss Sunshine’s success is that first word in its title. It’s an intimate piece, well-suited for Second Stage’s cozy off Broadway space, especially with Beowulf Boritt’s slick, Pop Art set design, which envelopes the auditorium and brings the audience into the wonderfully sad universe of the Hoovers. At the end of the journey, you are drawn you into their world, underscored by the pulsating heartbeat of Finn’s music.