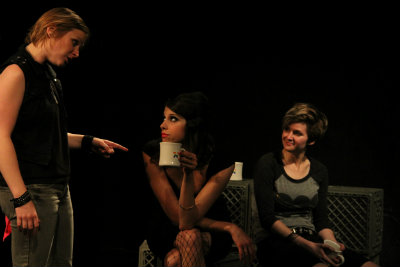 This summer the musical Lesbian Love Octagon, a celebration of New York lesbian culture in the 1990s, returns to the Kraine Theater after a two and a half year hiatus (Theasy reviewed the show during its original run). It seems fitting to set the play in the '90s, a time when the play’s setting, the Lower East Side, was a much more culturally diverse and affordable place and when being queer was a much more subversive thing to be. Whereas nowadays when many of the city’s lesbian bars have shut down, the '90s were a time when the city was rife with places for hip Sapphic ladies to be seen. Most of the play takes place at “the woman’s bookstore” (which seems to be Bluestockings), “the lesbian café”, and “the lesbian bar” (which seems to be the immortalized Meow Mix) and consists of hip lesbians reveling in their dating dramas.

At the center of the play is Sue (Caitlin Lee Reid), “a less than butch dyke with a broken heart,” who is trying to piece herself back together after being dumped by her long-time girlfriend, the self-centered Darla (Kristian Espiritu), who apparently left her for one of Sue’s exes. Her ex-girlfriends Wendy (Lindsay Naas) and Anya (Jenny Atwood) -- the endless exes is where the “love octagon” comes in -- try to console her and get her to indulge in some sexual release outside of the confines of a monogamous relationship but Sue is just a committed relationship kind of girl. In the humorous and energetic musical number, “Drink to Being Single,” Wendy and other bar patrons sing to Sue the benefits of not being tied down in a relationship, which leads to Wendy’s girlfriend Jess (Ti Grieco) angrily realizing that Wendy might not want to be monogamous with her.

Beneath all the humor and stereotypes however are some larger questions about gender and identity; they might occasionally get eclipsed by the jokes, but they’re definitely there. In a few scenes Sue sadly looks out at the audience and wonders who she really is: is being gay her entire identity? Or is there more to her than just her sexuality? If you take away her sexual orientation then what kind of woman is left?

The large cast energetically pulls off the show's many humorous musical numbers and the show’s lead actresses show a knack for comedic performance. Lindsay Naas as Wendy (who also was in the show’s original run) is particularly fun to watch as she often has drunkenly dramatic moments as she struggles with her own romantic confusion. Jenny Atwood as the statuesque “femme” Anya is also highly entertaining, especially during the song “Building a Butch,” in which she gives Sue a makeover.

While many aspects of GLBT culture have been explored on New York City’s stages, it has often focused on male experiences rather than female experiences, and the material of Lesbian Love Octagon feels fresh and new in its celebration of lesbian culture of the past. It both pokes fun at and celebrates lesbian stereotypes, reveling in them and then breaking out of them (one of the closing numbers sings about all of the couples getting a U-Haul to move in together). While those not familiar with women’s studies scholarship or lesbian culture might not get all of the name dropping and fast paced quips, the humor will surely apply to anyone open minded. It takes the standard musical format and transforms it into something new. Lesbian Love Octagon is a lot of zany, sexy, musical fun.