By Beth Henley; Directed by Robert Falls
Produced by The New Group
Off Broadway, New Play
Runs through 12.22.13
Acorn Theatre at Theatre Row, 410 West 42nd Street
by Sarah Moore on 11.7.13 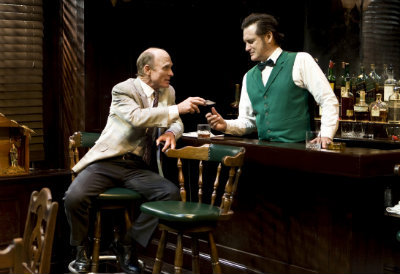 Ed Harris and Bill Pullman in THE JACKSONIAN. Photo by Monique Carboni.

Prepare to step back into Jackson, Mississippi, 1964. The newest Southern Gothic work by Beth Henley (Crimes of the Heart), led by Ed Harris, isn’t a light night at the theater, but that doesn’t make it any less worthwhile.

Harris plays dentist Bill Perch, who has taken residence in the titular Jacksonian motel during a separation from his wife, Susan, played by real-life wife, Amy Madigan. Their teenage daughter Rosy (Juliet Brett), serves as the go-between for her parents, and often comes to the Jacksonian to visit her dad. She hangs out at the bar with macabre bartender Fred, played with excellent darkness by Bill Pullman. Fred is a man of secrets, including a terminal illness he invents so he doesn’t have to follow through on his engagement to Eva (Glenne Headly), a ditzy motel worker who is desperate to get married. Eva finds out that Bill and Susan are separated, and sets off to claim the dentist as her own fiancé.

Henley’s dark comedy centers on the “Painless Dentist” and his family, set in a notably tense historic time period. The play is scattered with historical details like KKK references, however, we are never really able to connect the setting to the morbid plot. I do, however, think this disconnect is purposeful; many other details are left unanswered as well. Henley seems to have left many open ends in the story for us to piece together ourselves.

Though some of the portrayals border on caricature, all five actors turn in solid performances that compliment the darkness and absurdity of Henley’s play. Harris in particular, gives a riveting performance, as the dentist whose entire life is his work. It’s impossible to not be captivated as we watch his sense of self unravel as he loses his dental license.

Director Robert Falls has also done masterful work in this production. His staging has created the necessary tension and suspense, yet allows the actors space to tell the story at their own pace.

The production is beautifully designed, specifically Walt Spanger’s set, which creates a crappy hotel room on half the stage, and a hotel bar on the other half. The Christmas decorations move in and out as we see the story develop over the years.

Henley’s South is a different sort of South than Tennessee Williams', for example, though anyone who is familiar with her work knows this already. These Southern characters are uniquely Henley, and never resort to cliché. The story is told in flashback; we see how the play ends in the opening scenes, and we then rewind to explain how we got there. Yet the story never feels predictable.

I could have done without Rosy’s spotlighted monologues, which seemed to be trying too hard to be creepy; the play is creepy enough without them. Rosy sometimes feels more like a dramatic device or a horror trope than an actual character.

The Jacksonian is worth a visit for fans of any of these accomplished actors or fans of Henley -- though I would not recommend it for young children or those averse to dark plotlines.