By Jack Canfora; Directed by Evan Bergman
Produced by The Director's Company 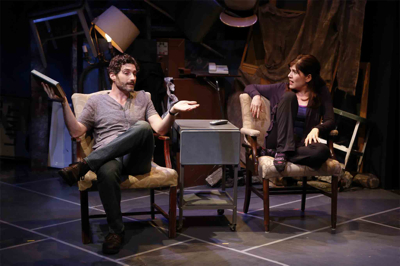 BOTTOM LINE: This contemporary play about the ways we cope after tragedy has some true moments of poignancy and humor.

For some people, Thanksgiving is that wonderful time of year where struggles, stresses, and problems are forgotten and replaced with the dependable comforts of food and family. But for Beth (Eleanor Handley), who has spent the last four Thanksgivings with the family of her dead husband Alec (Kevin Isola), it’s a yearly reminder of the gaping hole that September 11, 2001 left in her life. When she spontaneously decides to abandon her tradition and spend the upcoming holiday with her new boyfriend Ethan (Andrew Rein) and his family in Jericho, Long Island, Beth is exposed to a whole new set of baggage.

Jack Canfora’s Jericho, now playing at 59E59 Theaters and produced by The Directors Company, is a new play that focuses on the 9/11 tragedy and the lives touched by the disaster to convey the many ways that individuals cope with personal and collective grief. Despite trying various medications, Beth still sees her husband whenever she speaks to her therapist (also played by Isola), and recently has started to see and interact with him outside of Dr. Kim’s office as well. Josh (Noel Joseph Allain), Ethan’s brother and a 9/11 survivor, is determined to leave New York for Israel whether or not his wife, Jessica (Carol Todd), cares to join. Ultimately, the play offers an examination of grief, mental illness, and cultural and religious identity that remains equally relevant today.

While the themes have a lot to offer, the play sometimes falters in its execution. Canfora’s writing is somewhat inconsistent -- while he clearly has a tight grasp on razor-sharp banter, most frequently delivered by the delightfully sardonic Carol Todd, the moments that attempt to be most impactful tend to fall flat. Evan Bergman’s direction is effective in small scenes, but awkward staging for the important Thanksgiving dinner quickly slows down the momentum. Miscasting contributes further to the play’s problems, especially in the decision to cast Jill Eikenberry, of "L.A. Law" fame, as Rachel, a character written to be a stereotypical overbearing and guilt-inducing Jewish mother. Though multiple award-winning Eikenberry is undoubtedly a talented actress, her appearance and presence is practically antithetical to the familiar stereotype the role demands, offsetting the dynamic intended for the family scenes. Most unfortunately, the play is opening right on the heels of Roundabout’s Bad Jews, which also sees humorous and dramatic family squabbles over Jewish identity, (sometimes to the point of having recognizably similar dialogue) with considerably more success throughout every level of production.

Jericho offers a mixed bag of entertainment, but does include some moments of genuine poignancy. The relationship between Josh and Beth creates the play’s most interesting dynamic, and their scenes together glitter with sensitivity. The rawness of the subject matter, especially for a New York audience, is often written and delivered with a meaningful sincerity. The piece and the production, though both imperfect, still manage to elicit moments of true humor and tragedy.