The Importance of Being Ernest Hemingway

Written and directed by James Rutherford and Elliot B. Quick
Produced by M-34

Off Off Broadway, New Play
Runs through 9.1.13
Access Theater, 380 Broadway 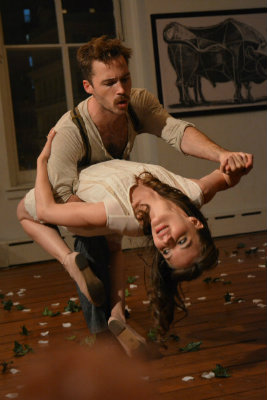 Ross Cowan and Charlotte Graham in THE IMPORTANCE OF BEING ERNEST HEMINGWAY. Photo by Nikki Delhomme.

BOTTOM LINE: This innovative and ambitious play might not be accessible to all audiences, but it boasts impressive comedic acting and set design.

The concept behind (the cleverly titled) The Importance of Being Ernest Hemingway is a highly innovative and unusual one: a mash up of Oscar Wilde’s The Importance of Being Earnest and several excerpts from Hemingway’s works including The Sun Also Rises, A Farewell to Arms and Death in the Afternoon, resulting in a comparison of the two playwrights' differing ideals of masculinity. In this revision Wilde’s characters are given more depth, especially the women, and the homosexual undertones that Wilde flirted with are brought forward and explored more blatantly with the characters Jack (Tim Hassler) and Algernon (Ross Cowan) becoming lovers. It is a highly ambitious idea, one that in practice works more in some aspects than others. When the male characters switch from spouting Wilde’s lines to spouting Hemingway’s their masculinity and emotions change, creating characters that have dual natures.

Stylistically, the production is extremely well put together. The stage is set up like a bar with a series of small tables surrounding the stage in addition to the regular seating. Before the show and during intermission, the bar in the set acts as a real bar allowing patrons to purchase drinks, something that contributes greatly to setting an ambiance befitting the show. Brightly colored fans are given to patrons to compensate for the spotty air conditioning, something that also seems to reflect the show’s time period. Scenes seamlessly slip from one to another and thanks to scene designer Oona Curley the scene is evocative of each setting.

The entire cast does a great job of delivering each line with the maximum comic potential and show a knack for physical comedy. Actor Charise Greene as Augusta steals every scene as she storms across the stage in anger, imposes frightening lines of questioning on the characters, drinks the drinks of audience members, and even plays with their cell phones.

Just as I am sure The Importance of Being Ernest was a demanding play to create, it also demands a lot of its audience members. Those without a knowledge of the work of Ernest Hemingway and Oscar Wilde, as well as those who lack a working knowledge of French (as the play is set in Hemingway’s France rather than Wilde’s England, some of the show’s lines are said in French) might not be able to fully appreciate it. Despite possessing a master’s degree in English literature and a background in French, I am still sure there are some references in this play that slipped right past me. And at nearly three hours in length it can be an arduous undertaking. Nonetheless, this is a play to be admired for its innovation, ambition, its impressive set, and the strong performances from the entire cast. M-34 seems to be a company willing to take risks and able to produce impressive work and for this they are surely worth keeping an eye out for.

(The Importance of Being Ernest Hemingway plays at AccessTheater, 380 Broadway through September 1, 2013. Performances are Thursday through Sunday at 8PM. Tickets are $15 and are available at M-34.org or by calling 301.706.7097.)