I Know What Boys Want 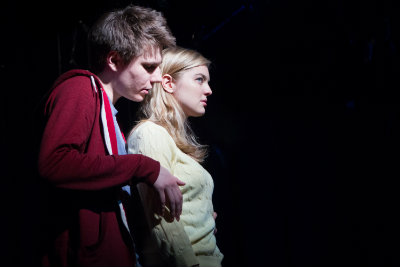 Nick Vennekotter and Sara Hogrefe in I KNOW WHAT BOYS WANT. Photo by Kacey Anisa.

Cell phones — perhaps a hundred of them — dangle all around Starlet Jacob’s set for I Know What Boys Want, Penny Brandt Jackson’s new high school drama produced by Ego Actus. The claustrophobia that modern technology can inflict on a person is a major theme in the play and the dangling phones take on a sinister significance as the tense and touching plot unfolds.

In the first scene, we learn that Vicky Walker (Sara Hogrefe) is the subject of a sex scandal at her New York City high school. A video of her and her boyfriend Roger (Liam Rhodes) has surfaced on an amateur porn website and it seems that Roger’s best friend Oliver (Nick Vennekotter) is responsible for uploading it. Vicky doesn’t remember the night very well and thinks she may have been drugged. The situation, already terrible for Vicky, is worsening as Oliver continues to upload new footage, keeping all of Vicky’s peers actively engaged in her nightmare. Vicky struggles through a complex series of consequences to the video — rejection by her best friends, suspension from school, and a lingering uncertainty that perhaps Roger is conspiring with Oliver.

What emerges as the central conflict, however, is between Vicky and her mother Margaret (Dara O’Brien). Margaret struggles to reconcile her 1970s-style feminist values with Vicky’s reckless sexuality while Vicky, though also horrified by the videos, is proud of her sexual nature and part of a generation that values exhibition through social media. Though they don't see eye-to-eye, the strength of their relationship is never in question and Margaret's dedication to her daughter puts her in some rather interesting situations and pushes her to face some of her own problems.

Though Jackson’s dialogue, on the surface, is sometimes weighed down with clichéd or unnatural exchanges, on the whole it presents a thoughtful and nuanced picture of an entirely present-day situation. Each of the characters begins as a sort of stereotype, but six out of eight of them transform into complex and dynamic individuals. The night I saw the show, much of the stiltedness of the script and staging that was inescapable in the first few scenes later dissolved and the play took on a raw and believable quality. The actors, dialogue, and staging all seemed to grow up before my eyes. Perhaps this is just a symptom of seeing it early in its run and later performances will be more comfortable throughout.

The cast deserves praise for bringing this show to life and pushing past some of the drawbacks of the script. Teddy Lytle stands out as Ted, the dopey California transplant who, through his compassion for Vicky’s situation — and women in general — serves as a foil to Oliver, whose emerging sexual nature is a menace to women, and Roger, who succumbs to Oliver’s pressures rather than doing what he thinks is right.

Overall, I Know What Boys Want packs a surprising emotional and intellectual punch and addresses a question that most of us should think about these days: Just what is that little friend in your pocket capable of?