How 2 B A New Yorker 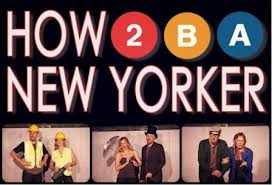 BOTTOM LINE: Sketch comedy that gives tourists a thin slice of the "real" New York. It's like a double-decker bus tour without any of the actual sights.

The scripted sketch comedy show, How 2 B A New Yorker, has a new home at the newly remodeled Planet Hollywood in Times Square, a perfect venue for this tourist-aimed night of dinner and comedy. If you're visiting New York and thinking, "Man I really wanted to see a comedy show, but I'm really hungry," then How 2 B A New Yorker is the show for you. Licensed tour guides Margaret Copeland and Kevin James Doyle play over 70 characters as they take you on trip through New York's history and neighborhoods from the early days of Dutch colonization thru the Disneyfication of Times Square.
There are crazy accents and every New York cliche imaginable. The two actors tell personal stories from their time "finding their way" in this crazy city that might be interesting to tourists but will strike the average New Yorker as pretty banal. How 2 B A New Yorker is a show for tourists. Period. It spends a lot of time trying to convince the audience that parts of New York are safe, and that the people are actually nice. New Yorkers already know that and, quite frankly, might get a little bored. That being said, Copeland and Doyle are trying their darndest to make pretty trite material fun and engaging. The group of German tourists next to me was having a great time
I'm glad that there is a show like this that gives tourists a fun night with good food and some entertainment. It's better than your average comedy show, and a non-New Yorker might find it pretty informative. A major surprise for me was how great the food was. There is a pretty fantastic Italian buffet with salad, chicken parm, fettuccini alfredo, and spaghetti marinara. Throw in some assorted cookies and brownies for dessert and you have a pretty happy audience. So, if you're not from New York, you're hungry, and you want to laugh a little, check out How 2 B A New Yorker.

(How 2 B A New Yorker plays at the Screening Room Theatre at Planet Hollywood Times Square, 1540 Broadway, through September 1, 2014. Enter on 45th Street just east of Broadway. Performances are Fridays at 7 PM and Saturdays at 1:30 PM (stated time is the beginning of the meal; doors open 30 minutes earlier). Additional performances during the holiday season: Sunday November 11th at 1:30 PM, Friday November 29th at 1:30 PM, Sunday December 1st at 1:30 PM, Thursday December 26th at 7 PM, Sunday December 29th at 7 PM, Thursday January 2nd at 7 PM, Friday January 3rd at 1:30 PM, and Sunday January 5th at 1:30 PM. Tickets are $59, which includes the full lunch/dinner; there is a cash bar. For tickets and more information, visit www.how2banewyorker.com or call 212.352.3101.)